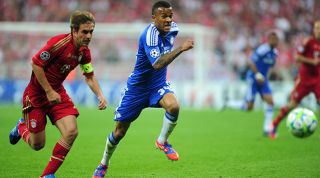 Rafael Benitez’s greatest managerial achievement? Not winning two La Liga titles with Valencia, nor securing a mid-table finish with Newcastle this term, but guiding a Liverpool side featuring Traore at left-back to Champions League glory in 2005.

The Malian made 42 appearances in all competitions for the Reds that season and duly started the final against Milan alongside Steve Finnan, Jamie Carragher and Sami Hyypia. Traore’s suspect positional play contributed to Liverpool’s 3-0 half-time deficit – indeed, he would have been taken off but for Finnan's injury – but a remarkable fightback after the break meant the future Charlton, Portsmouth and Birmingham man ended the night as a Champions League winner.

Jose Mourinho announced himself to the world in 2003/04, when his Porto team pulled off the biggest shock in Champions League history by winning the trophy. Their most memorable victory before the final came against Manchester United in the last 16, with Benni McCarthy’s brace in the first leg vital to Porto’s progression.

McCarthy had to be content with a place on the bench in the Gelsenkirchen showpiece against Monaco, though, with Carlos Alberto – scorer of the opening goal in a 3-0 victory – given the nod alongside Derlei up front. The Brazilian, who went on to represent Corinthians, Vasco da Gama and Figueirense in his homeland, played just 34 times for Porto overall.

Watford fans couldn’t help but get excited when the Hornets broke their transfer record to snap up a winger with Champions League pedigree in 1999. Wooter, signed for £950,000, spent three seasons at Vicarage Road without ever really hitting the heights expected of him, scoring just three goals in 63 league games before departing for RBC in the Netherlands.

Wooter’s playing career later took him to Portugal, Greece, Turkey and Cyprus, but it was at Ajax where the uncapped Dutchman made his breakthrough in the mid-90s. The then-teenager appeared as an extra-time substitute in the 1996 Champions League Final, which Ajax lost to Juventus on penalties.

Lemina was locked in a relegation battle with Southampton this season; a year ago, he was getting ready for a Champions League final with Juventus. The Gabonese featured six times on the road to Cardiff, helping the Bianconeri advance to their second final in three seasons at the expense of Porto, Barcelona and Monaco.

Named among the substitutes against Real Madrid, Lemina was introduced with 12 minutes left to play. By then, though, Juve’s race was run: Zinedine Zidane’s side held a 3-1 lead which was extended by Marco Asensio late on.

Rafael, not Fabio, was the twin who made the bigger impact at Old Trafford, playing 169 games (113 more than his brother) in all competitions during his seven seasons on Manchester United's books. He missed the 2011 Champions League Final through injury, however, so it was Fabio who got the nod at right-back against Barcelona.

The Brazilian was largely a squad player throughout his time with the Red Devils, and he struggled to shackle Lionel Messi, Pedro and David Villa at Wembley – although he was far from alone in that regard as United were outclassed by Pep Guardiola’s brilliant bunch.

The lack of academy graduates in Chelsea’s first team has been a major talking point for several seasons now, but it’s often forgotten that Bertrand – a player who joined the Blues from Gillingham at the age of 15 – was involved in their greatest-ever achievement in 2012.

The Southampton man was deployed in an unfamiliar left-wing role against Bayern Munich – his first ever Champions League appearance – with Ashley Cole selected in his favoured left-back position. Bertrand spent much of the game in defensive areas, but a resolute Chelsea won the final on penalties.

Premier League fans will know Givet and Squillaci from their mixed success at Blackburn and Arsenal respectively, but before that the duo formed a dogged centre-back partnership at Monaco.

Squillaci was a substitute for the 2004 final against Porto – Jose Mourinho’s men triumphed 3-0 – but he was afforded 18 minutes in the second half. Givet, meanwhile, started alongside Julien Rodriguez at the heart of defence, but was powerless to resist as Porto proved too strong at the Arena AufSchalke.

In 1997, Crystal Palace surprisingly signed two members of the Juventus squad that had won the previous year's Champions League. Attilio Lombardo was a resounding success at Selhurst Park and is still considered the most talented player to have represented the club by many Eagles fans, but Padovano (left) - scorer of one goal in 12 league appearances for the south Londoners - didn't fare quite as well.

The striker replaced Fabrizio Ravanelli in the 77th minute of the 1996 final against Ajax, which was eventually settled by a penalty shootout after a 1-1 draw. He went on to play for Metz and Como after leaving Palace, and was sentenced to eight years imprisonment for drug trafficking in 2006.

A handful of players have been ever-present throughout Atletico Madrid's recent period of success under Diego Simeone, with Gabi, Juanfran, Koke and Diego Godin among those who featured for the Colchoneros in both the 2014 Champions League Final and 2018 Europa League Final.

Diego Costa and Filipe Luis also played in the former showpiece, but the three used substitutes in that 4-1 defeat by Real Madrid four years ago all left the club soon after: Toby Alderweireld is at Tottenham following a loan spell at Southampton, Adrian remains at Porto and Jose Sosa, a temporary member of the Atletico squad borrowed from Metalist Kharkiv, now plies his trade at Trabzonspor.

Roque Junior boasted World Cup and Champions League winners' medals among his possession by the time he was loaned to Leeds in 2003, but the central defender didn’t live up to his billing at Elland Road and his career rather petered out thereafter.

The Brazilian was part of Milan’s Europe-conquering squad of 2002/03, appearing as a 66th-minute substitute in the final against fellow Italian outfit Juventus. The two sides couldn’t be separated after two hours of goalless action, but it was Milan who kept their cool to triumph on penalties at Old Trafford.

The Liverpool XI that lost the 2007 Champions League Final to Milan was stronger than the one which beat the same opponents two years before, with Javier Mascherano and Pepe Reina both upgrades on what went before. Pennant was another newcomer by the time of the Athens decider, which was settled by Pippo Inzaghi’s two goals either side of half-time.

Pennant featured 52 times for the Reds in 2006/07, but his game time decreased the following season and he was loaned to Portsmouth in 2008/09. The winger went on to play for Real Zaragoza, Stoke, Wolves, Pune City, Wigan, Tampine Rovers, Bury and Billericay Town.

Nava made just 21 Serie A appearances for Milan across five years in the early-to-mid-90s, but the centre-back can at least point to the excuse that he was competing for places with some of the greatest defenders Europe has ever seen. It was, frankly, no surprise that the likes of Paolo Maldini, Alessandro Costacurta and Franco Baresi were ahead of him in the pecking order.

Nava did get on the field during the 1994 Champions League Final, though, entering the fray as an 83rd-minute replacement for Maldini. Fabio Capello’s men were 4-0 up by that point, with pre-game favourites Barcelona humbled by a Milan side that scored only 36 goals in winning the league that season.

Pereyra was only a squad player as Juventus made it all the way to Berlin, but it’s easily forgotten that he actually appeared in all but one of their Champions League games en route – the first of their campaign against Malmo.

The Argentine was actually on loan at Juve from Udinese in 2014/15 before signing permanently with the Old Lady that summer after his 11-minute cameo in the final against Real Madrid. He only lasted another year, though, before joining Watford for around €15 million.

QUIZ! Can you name the line-ups from the last all-English Champions League final of 2008?

LIST The 10 best teams that DIDN'T win the Champions League