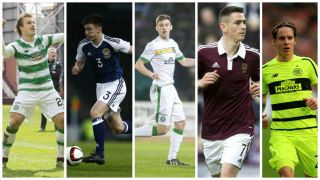 Just 12 months ago, Kieran Tierney had a little over 90 minutes of first-team football under his belt. Now he’s a full Scotland international, a pivotal member of Celtic’s title-winning side and the most hotly sought-after player north of the border. It’s a far cry from the night he served as a ball-boy when the Bhoys beat Barcelona 2-1 in November 2012.

Tierney only turns 19 on June 5 but looks set to command a fee of £10million should any deal be made for his services this summer, which is looking increasingly likely. As strong at the back as he is going forward, the Manx-born starlet has forged a reputation as a great reader of the game with a football brain that defies his tender years.

Would be a fit for:Arsenal. Gunners scout Danny Karbassiyoon has talked about intelligence on the ball as the key factor in identifying top quality youth at the Emirates. A ball-playing full-back who gets stuck in – “He’d tackle his granny,” says Celtic skipper Scott Brown – he could provide the right blend of grit and guile to bolster Arsenal’s title credentials, while spelling the end of Kieran Gibbs’ stay in north London.

Only 21 but already with four seasons of first team football behind him, the former St Mirren midfielder has played in two Hampden Park cup finals and was awarded man of the match on his international debut for Scotland, a 1-0 win against Denmark in March. This month he was voted PFA Scotland’s Young Player of the Year, despite Hibs failing in the play-offs in their bid to return to the Scottish Premiership.

Combative and creative, McGinn raised eyebrows in not just holding his own but excelling on his first run-out in the international arena at Hampden, which is quickly beginning to feel like home for the Hibs youngster – he impressed again as Hibs beat Rangers to end their 114-year wait for the Scottish Cup. He’s been praised for his energy and bursting runs from midfield, and his development has been the high point of a bitter-sweet year for the Easter Road side.

Would be a fit for: Any side which relies on breaking up play and attacking with speed; the south coast seems a good bet. Southampton could have a vacancy if any one of Saido Mane, Dusan Tadic or Victor Wanyama were to move on in the summer, and slick but sometimes stretched Bournemouth would likely be interested in McGinn’s blend of industry and craft.

Born in Denmark to Ukrainian parents, Erik Sviatchenko was a highly-rated product of the youth academy at Danish champions FC Midtjylland, where he captained the U19 side and was a perennial award-winner. He made his debut for his birth country last year in a friendly win against the USA and the 24-year-old is being groomed as the heir to Daniel Agger.

Since arriving in Glasgow in January, Sviatchenko has been a defensive rock, and by May he had been handed the captain’s armband in the absence of regular skipper Scott Brown. Unfazed by the unenviable task of filling the hole left by Virgil van Dijk, the centre-back helped the champions rack up comfortably the best defensive record in the Scottish Premiership: of his 16 starts, they lost only two.

His displays suggest the possibility of similar success should a Premier League side take the same punt as Southampton did on van Dijk last summer – although Sviatchenko would need to be very impressed: he turned down English suitors in January before signing a four-and-a-half-year deal with “much bigger club” Celtic.

Would be a fit for:Everton, should John Stones make his long-speculated move away. Another defender comfortable in possession, the Dane is also a vocal leader who could knock heads together at the heart of a chaotic back four at Goodison Park. The Toffees could do a lot worse than to follow Southampton’s example and take a gamble on another Hoops’ stopper to fill a freshly gaping hole.

“I’ll be very surprised if there’s not a big offer made for Jamie from down south this summer,” said former Hearts midfielder Paul Smith in March of 22-year-old Jamie Walker. Smith had mentored Walker during a loan spell at Raith Rovers in 2011/12  and has watched the Hearts winger nail down a regular place in the side. The Edinburgh-born starlet already has over 100 first team appearances and 26 goals for the Tynecastle outfit.

Not the most physical player in the Premiership, Walker has earned his plaudits from his unerring ability to cut in from the flanks and split defences with his direct running.

“When he’s on his day, you just want to give him the ball,” said former teammate Brad McKay. “Jamie can play on the wing, but if it was up to me, I’d always have him in the No.10 role and let him roam around and cause problems. He’s just an incredibly talented footballer.” His performances this year helped third-place Hearts return to Europe after a four-year absence.

Would be a fit for: La Liga. Former West Brom boss Pepe Mel was reportedly keen to take him to Betis but the Baggies cast off has since been replaced in Seville by Gus Poyet. Walker’s trickery and speed of thought would be a pleasing fit in a league that purrs over silkily-skilled operators. He may need to bulk up to draw interest from the Premier League.

They love a creative No.2 at Parkhead, and Stefan Johansen is no different. Treading where club favourites Lubo Moravcik and Shunsuke Nakamura have left huge footprints before him, the Norway international stepped into the heart of Celtic’s midfield in January 2014 and quickly made it his own, taking last season’s PFA Scotland Player of the Year to go with his Kniksen Award for being Norway’s best midfielder in 2013.

Celtic spent much of last summer batting away transfer speculation and will need a steely resolve to do so again. A handful of Bundesliga clubs expressed interest during the summer window and off the back of another championship-winning season, in which Johansen – now 25 – has been imperious at the heart of the Bhoys’ midfield, contract negotiations have broken down... which has alerted clubs on the continent once more.

Would be a fit at: In terms of the Premier League, he could reasonably expect to hold down a place at a top ten club, with West Ham, Southampton and Stoke all well suited to the kind of high-energy, free-flowing football that the Norwegian has played to move himself to the top of Scotland’s most-wanted list. There will be strong competition from Germany again, however.