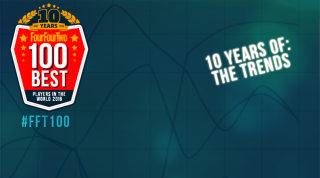 “Yet another in the ever-lengthening line of New Maradonas, Aguero joined Atletico Madrid for €25m last summer and, quite frankly, failed. Yet amid the gloom, there were occasional signs of his talent.”

That’s what we wrote about Sergio Aguero in the autumn of 2007. The 19-year-old was placed 96th in the first instalment of FourFourTwo’s 100 Best Players in the World, just above Jamie Carragher. One place ahead of Aguero, at No.95, was another future Manchester City forward. If anyone’s seen Nery Castillo lately, do let us know.

Our point isn’t that things change – we all know that. It’s how they change that's fascinating. For instance, this year’s shift in the American political landscape is very different to the one that occurred in 2008. While the FFT100 doesn’t carry quite the same planet-ending potential – although it’s occasionally apparent that some readers would disagree – we too have seen interesting cultural shifts, reflected in nine years of listing the world’s best footballers.

Players have been feted, slated and eviscerated. Upstart superclubs have emerged before falling away again, existing only in the tired routines of a bad comedian (“Remember Anzhi Makhachkala? What was that about?”). Whole leagues have flourished and floundered. And as JFK once said, nations may rise and fall but you can never write off Lionel Messi.

So as the FFT100 reaches its 10th edition, we reveal how it's mirrored trends of Germany’s ascent, England’s collapse and more besides – plus, of course, the times we cocked up. You have to give the people what they want.

When England ruled the world

In September 2007, England were kings of football. That’s apparently what we thought, at any rate. Our countdown of Planet Earth’s 100 best players included 13 Englishmen, the most of any nation, with more than half of them taking up residence in the Top 30. There was bunting on the streets. Grown men wept with pride. Everyone was excited.

Two months later, the Three Lions failed to qualify for Euro 2008. The bunting came down. Grown men wept with despair. Everyone said FFT may have misjudged the quality of English footballers in a global context. Smart-arses.

And yes, perhaps it was a wake-up call for us as well as England – indeed, in the following year’s Top 100 list their number dropped from 13 to eight. But it also showed the extent to which the Golden Generation failed, because while we may have got a little carried away by counting Gary Neville and MLS-era David Beckham among the sport’s elite, there’s no doubt that even those abroad saw, to steal Jamie Redknapp’s schtick, “your Gerrards, your Lampards, your Rooneys” as genuinely world-class players.

Today, our Top 100 features four English players, all in the bottom half. In a weighted list, with 100 points being given to No.1 and one point to No.100, with every equivalent in between (we’re a riot at parties), England rank as low as 12th – and this is purely measuring players’ talent, not how it’s used in a national team. Last year, England scored 99 points while Spain got 895. It’s a gulf.

On the plus side for England, the likes of Dele Alli and Raheem Sterling have their best years ahead of them. And at least they’re not the Dutch. Look at those losers!

England’s Euro 2016 debacle doesn’t come into it, either. International tournaments don’t dictate our Top 100, although they may impact on some players’ positions. Look at France. This year’s list includes 14 Frenchmen. That’s the largest ever representation from any one nation that isn’t Spain, who won so hard at football a few years ago that they twice had 21 players in our Top 100. Of those 14 Frenchmen, how many do you think were in the finalists’ Euro 2016 squad – all of them, right? Nope. Seven.

England’s drop-off over the past decade of Top 100 compilations isn’t a reflection of their failure at tournaments. It’s more the other way around.

“Davide Santon is heading for a long, distinguished career”

Intermission! We’ll return to analysing trends in a moment. First, a quick quiz. In happier times – namely 2007 and 2008 – the now-Football League trio of Newcastle, Blackburn and Portsmouth each had a player in our Top 100 lists. Can you name those three players? Answer after the picture.

Did you get all three? The answers: Michael Owen, Roque Santa Cruz and Lassana Diarra. Well, quite.

Not all of our entries have stood the test of time. The FFT100 isn’t meant to predict the future – it names the best footballers in the world at that time – but we cringe whenever we re-read our 2009 prediction that “Davide Santon is heading for a long, distinguished career”. Wilson Palacios was six places higher at No.93 that year, while at No.37 we compared rising star Yoann Gourcuff to Zinedine Zidane and said, “He should be knocking on the door of the top 10 next time around.” These players were actually good then, and hindsight is 20/20, but still. Argh.

Similarly, our 2007 claim that Inter’s David Suazo “is expected to be one of the sensations of Serie A” looks misjudged now, while this statement from 2010 may raise eyebrows in north London: “The tall, hard-working and skilful Marouane Chamakh has thundered out of the blocks at Arsenal, belting in goals for fun against Premier League opposition.”

All right, you can stop laughing now. Just remember that our 2007 list also included a teenage Aguero, a 20-year-old Samir Nasri and the 21-year-old pair of David Silva and Sergio Ramos well before they approached their peak, while Lionel Messi was in our Top 5 as young as 20. Later FFT100 countdowns featured under-21 prodigies Karim Benzema (then of Lyon), Eden Hazard (Lille), Neymar (Santos) and James Rodriguez (Porto).

The two teenagers in this year’s list, Ousmane Dembele and Renato Sanches, have been snapped up by big clubs already: Borussia Dortmund and Bayern Munich. Which brings us to our next point…

Fewer clubs are represented in the Top 100 these days. This year it’s 24; in 2012, it was 32. And the chief reason is that the biggest clubs are buying talent at a younger age, so starlets such as Dembele and Sanches aren’t representing Rennes or Benfica on the list.

Sometimes these breakthrough players aren’t on the list at all, because across the calendar year, their big summer move has temporarily meant less game time. Had 22-year-old Vincent Janssen stayed in the Eredivisie after his incredible first top-flight season, he might not have dropped out of our considerations after an inevitably sluggish start in a far tougher division with Spurs. Long term, of course, it’s the right move for Janssen; as far as our Top 100 is concerned, however, there’s only room for those who immediately make an impact at that higher level, such as Samuel Umtiti at Barcelona or Raphael Guerreiro at Dortmund.

So, there’s a narrower spread of talent abroad. Barcelona, Real Madrid and Atletico are the only La Liga teams represented in this year’s list (Villarreal’s Mario Gaspar just missed out). Bayern Munich and Borussia Dortmund are responsible for 20 of the Bundesliga’s 22 players, although Bayer Leverkusen are also present and Wolfsburg, Cologne and Borussia Monchengladbach all had players on our longlist. Even in the Eredivisie, Ajax’s Hakim Ziyech was taken from Twente this summer.

It isn’t just youngsters, either. Juventus, like Bayern before them, are not merely buying top players, but their rivals’ top players – hence Juve’s new highest Top 100 ranking, with Miralem Pjanic and Gonzalo Higuain joining a core of defensive Italian mainstays.

The Premier League is the exception, because of its lucrative new TV deal. If the opposite of a monopoly is perfect competition, the Premier League might be the closest to it. As a flurry of new contracts for Tottenham and Leicester players showed, smaller English clubs are less subservient to the lairds of the league. And so, the FFT Top 100 includes players from nine Premier League teams – more than La Liga, the Bundesliga and Ligue 1 combined.

That doesn’t mean the division dominates our Top 100, though, as shown by these weighted rankings of the leagues (again, assuming 100 points for the player at No. 1 and so on down to one point for No.100).

The Premier League has fewer players at the top now, but they’re more evenly spread. Chelsea had 13 players in our first list. Now it’s four – the same as Spurs, who once had only Dimitar Berbatov to their name. That’s a meritocracy, folks.

In contrast to Bayern’s 15-strong contingent – a new record high – no Premier League club has more than five. Meanwhile, Bayern, Barcelona and Real Madrid are stronger, while Milan’s giants are in the toilet.

So what do we learn? That the Premier League spreads its talent and wealth further across the division. That Les Bleus are going places and the Oranje are not. That England are a bit crap.

Or maybe we just learned that trying to identify the world’s 100 best footballers opens you up to mockery. Wilson Palacios, for God’s sake...