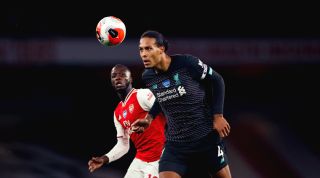 Arsenal haven’t played Liverpool in the Community Shield for 18 years. Back then, Frenchmen Arsene Wenger and Gerard Houllier were at the respective wheels; Michael Owen and Thierry Henry were the headliners. Plenty has changed, much for the worse. But at least we don’t let anyone kid themselves that it’s a proper tournament anymore.

“This match is more than a friendly,” said Gerard Houllier. “The Community Shield is like a final. There is a trophy at stake and we are the holders.”

The idea of Jurgen Klopp yelling at Mohamed Salah to sprint back and help his full-back against Aubameyang this weekend is an amusing one. Neither Liverpool nor Arsenal really care that much about the giant dish plate on offer to winner - but the match feels a little different this year for a number of reasons. What exactly can we expect from this year’s curtain-raiser?

An even friendlier feel

Essentially, the Community Shield exists as an opportunity for the two big winners of last season to build up their match sharpness in a sort-of competitive game, just seven days before the Premier League season kicks off, after three months of rest. Right?

This season, there’s been about six weeks of rest, the Premier League kicks off again in a fortnight and the two teams will be heading on international break after the match. This will have far more of a friendly feel than ever before - as if the Community Shield ever breaks into scuffles - with both Arteta and Klopp able to approach this one with even more license for experimentation.

Both managers have stuck to their respective formations in preseasons, but we could see more youngsters brought in and new ideas tested out. Arsenal sat back and soaked up pressure when they last faced the Reds: perhaps they’ll go out and attack a little more this time, since there are no points at stake.

The chance to test William Saliba

First outing for William Saliba ✅What did you make of Wilo's performance in just 𝘁𝗵𝗿𝗲𝗲 words? 🤔 pic.twitter.com/AFCRb6ZLv0August 26, 2020

Arsenal’s defence is in dire need of repair. The incoming Gabriel Maghalaes should help in that regard but even if he is signed by Saturday, he’s not likely to feature so sooner.

William Saliba, on the other hand, has been loaned out to Saint-Etienne and is more than ready to slot into the Arsenal backline. Keeping Salah, Firmino and Mane at bay will be a baptism of fire for the Frenchman, but it should give fans a chance to see their new man in action.

Saliba featured against MK Dons in a friendly the other day. He looks tailor-made for that right-sided centre-back position and though Arsenal are likely to line up with a back three, his physicality will be much-needed at the heart of defence.

An opportunity for Liverpool youngsters

For the second summer in a row, Liverpool are not spending heavily. Left-back Kostas Tsimikas was brought in because Norwich City were demanding too much for Jamal Lewis - that’s the situation Jurgen Klopp is in with how little he has to work with.

The Reds’ thriftiness grants new opportunities to young faces. In the likes of Rhian Brewster, Neco Williams, Ki-Jana Hoever, Curtis Jones and Harvey Elliott, Klopp has a group of talented starlets who could be capable squad players now rather than later.

If any one of them could put in a star turn against Arsenal, it might convince Klopp to keep them close to the first team this coming campaign. After all, Trent Alexander-Arnold’s rise from that same academy to becoming one of the best right-backs in the world seemingly came out of nowhere, too.

Arsenal still want Thomas Partey and are turning their attention to Roma’s Amadou Diawara, should that fall through. Dani Ceballos is keen to return but might not; Lucas Torreira is yearning for Italy, still. Matteo Guendouzi looks unlikely to ever return from the naughty step.

All in all, only Granit Xhaka can really be counted on for the Gunners - not something that many would’ve believed/wanted to believe a little while ago. This weekend gives Mikel Arteta a selection headache of sorts; Mohamed Elneny was used in midfield alongside Xhaka against MK Dons, while Joe Willock is an option. Bukayo Saka looks good in midfield too, when played there.

Until Arsenal resolve their transfer dealings, Arsenal’s midfielders have a chance to show what they can do.

Gomez and Alexander-Arnold keen to impress

Both Joe Gomez and Trent Alexander have keen competition for their roles and both will want to prove that they’re the right men for the side. But not at Liverpool.

With the recent England squad containing a plethora of right-backs, Alexander-Arnold has a difficult job to establish himself ahead of Southgate’s favourites, Kyle Walker and Kieran Trippier. Keeping Aubameyang quiet will likely go a long way to helping, however; Joe Gomez could do with a titanic performance too, especially with Harry Maguire not around this time in the Nations League.

It’s odd that neither is an automatic starter for their country, given their club exploits. With the Community Shield being the perfect headstart over rivals, perhaps Trent and Gomez will put that right.