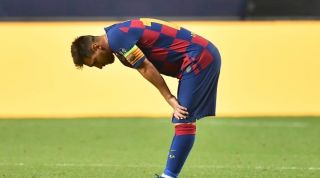 Lionel Messi has told Barcelona bosses that he wants to leave the club this summer – and wishes to trigger a clause in his contract that will mean he can leave on a free transfer.

Barcelona have confirmed the news, but unsurprisingly see things a little differently: they believe the clause that would allow that expired in June, and that Messi has a release clause of €700 million.

LONGREAD How did Barcelona's academy lead to a club in crisis? The inside story of the death of La Masia

That leaves the two parties ever so slightly apart. While most would wonder what €700m is between old friends, the disagreement could put them on course for a major legal battle.

The Barça board has called an urgent meeting to discuss the situation, which can only likely result in panic and incrimination at the Camp Nou.

Manchester City and PSG were immediately installed as the bookies' favourites to land Messi's signature.

Watching him at grow at Barça since he first broke into the team as a 17-year-old has been a joy; watching him leave will be an odd decoupling experience for the whole world.

📅 Who remembers this cover?Back in 2005 we went to chat to Ronaldinho about being the best player in the world. He ended up introducing us to a little player called Lionel Messi...#TBT #Messi pic.twitter.com/H7VAvBk4zpMarch 21, 2019

Rumours started to grow in July this year that the world's best player was unhappy. On the pitch, the Catalan side have had their problems recently – it is the first season since before Pep Guardiola became manager that they have failed to lift a single trophy.

But it seems off the pitch, there have been problems too. Messi has publicly rebuked statements from inside the club twice over the past few months, on whether the players had a role to play in manager Ernesto Valverde's sacking, and whether they were prepared to take pay cuts to ease financial pressures caused by coronavirus.

It has led to a widespread belief there is a rift between Barcelona president Josep Maria Bartomeu and their star player. With Bartomeu facing a re-election campaign next summer, a narrative grew that Messi's future depended on the outcome of that ballot. It seems now that election did not come soon enough. Not great for Bartomeu's hopes.

Then there's stories of dressing room unhappiness. Messi reportedly wanted the club to sign Antoine Griezmann last year – which they did, at eye-watering expense. Now, it's claimed, the two don't get on, following an inconsistent debut season from the £120m Frenchman. Perhaps Messi is simply tired of reading what are supposedly his own thoughts in the media.

The crumbling Barça philosophy can't have helped, though. As Andy Mitten recently spelled out in a longread for FourFourTwo magazine, the famed La Masia academy is no longer bringing through the talent that once sent Messi, Xavi, Andres Iniesta, Carles Puyol, Victor Valdes, Cesc Fabregas and Gerard Pique through to the first team.

Of course, Barcelona's 8-2 humiliation at the hands of Bayern Munich in the Champions League can't be ignored in all this. It exposed how far the team has fallen.

A day later, Koeman himself was making a public statement that Messi's future was in Catalonia.

According to Guillem Balague, the respected Spanish football journalist, the choices are either asserting what they believe is their right to a transfer fee in court, allowing Messi to leave on a free, or the resignation of Bartomeu and crisis talks with the No.10.

According to @Alfremartinezz, FCB preparing response to burofaxMost logical solution: resignation of chairman JM Bartomeu, early elections and Messi staysBut all that in the hands of a questioned board and chairman who otherwise could end up era with a high profile court caseAugust 25, 2020

Will that really be enough? Man City and PSG wait in the wings. Inter have been interested in the past. Any number of cash-rich clubs would gladly break their own finances for two years of being graced by Messi's magic. A move to China or Qatar couldn't really be ruled out.

For the first time, it really does seem more likely than not that Messi will leave.