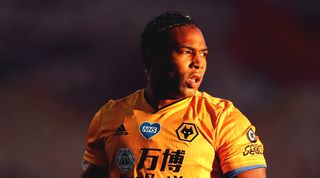 Wolverhampton Wanderers could be forced to sell their muscly wideman Adama Traore if they want to make new signings - with both Liverpool and Manchester City poised to bid.

Traore, who's recently been called up to the Spanish national team, has had an electric season for Wolves. Originally more on the periphery of the side when he signed, he's become their most important creator, functioning either on the right of Raul Jimenez, up front with the Mexican or even at right-wing-back at Molineux.

While the Spaniard is an undisputed starter under Nuno Espirito Santo, however, the Portuguese manager could be tempted to part with his player in order to bolster the squad.

Adama would command at least £40m - even in a post-COVID landscape. With Wolves closing in on utility man Ainsley Maitland-Niles from Arsenal for £20m, the club are keen to improve on what is a particularly thin squad.

With Matt Doherty a £20m target for Tottenham Hotspur too, Nuno could well sell two key players this window.

Liverpool have long had an interest in Adama Traore and would love to add his unique dynamic to their side. Jurgen Klopp has sometimes toyed with a 4-2-3-1 with Roberto Firmino behind Mohamed Salah - Traore slots perfectly onto the right-wing in such an instance.

With talk of how Klopp may have to refresh his front three sooner or later too, Adama could be groomed for the Salah role in the side.

Manchester City have also been linked with Traore's services in the past. Having just bought Ferran Torres to play right-wing in their side, Pep Guardiola would only be in the market for his fellow La Masia graduate, should Riyad Mahrez leave the club this summer. Mahrez isn't strongly linked with a move away from the Etihad but there are concerns over how little he played in the Champions League knockouts.

Wolves could swoop for Sevilla wideman Lucas Ocampos, according to reports, should they sell Traore for enough money.

Ocampos allegedly has a £60m release clause but the Europa League winners are apparently willing to negotiate, should the right bid come in. If Traore were to leave for a significant amount of money, Nuno could well see Ocampos as an upgrade on his current options.

Wolves are currently concerned that Traore could miss the start of the season with a shoulder injury, though it's thought that he won't require surgery.