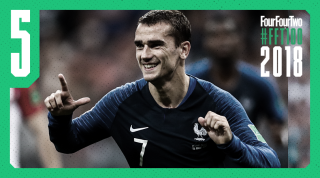 This time last year, Griezmann was heading into the new year targeting a World Cup win with France, a shot at the Ballon d’Or and perhaps a move to Manchester United. The first prospect came off, the second one not quite. Nor, to his relief, did the third.

Yet what lingers is the Ballon d’Or. Griezmann had hoped to become the first mortal man in a decade to win the prize, only to see Luka Modric become the one to wrest it from Lionel Messi and Cristiano Ronaldo. “When I learned [I didn’t win], you didn’t want to be at home with me the first two days,” Griezmann joked. But then he asked: “What more could I have done?”

The Ballon d’Or tends to go to those who shine on the big stage, and Griezmann this year did. The 27-year-old hit four goals to help France to the World Cup final, where he tucked away a penalty in a 4-2 win over Croatia. He was voted man of the match. The World Cup usually weighs heavily in the Ballon d’Or vote, and it surely wouldn’t hurt his chances that the magazine handing out the award was France Football.

Then consider his club season. Griezmann fired Atletico Madrid to victory in the Europa League, scoring twice in the 3-0 final demolition of Marseille. A few months later he took part in a crushing 4-2 demolition of Real Madrid in the UEFA Super Cup. As for La Liga, he struck 19 goals and created another nine in 32 games last season. Not bad. Not bad at all.

What did count against him, however, was the Champions League, where Atletico crashed out in the group stage. The last five Ballon d’Ors have gone to players who have won the tournament that same year, four of whom have played for Real Madrid. And so it doesn’t help Griezmann that it’s harder to win titles at Atletico than at Madrid.

Then again, Griezmann knew that when he was weighing up whether to leave or stay. After the United rumours had cooled, he came close to joining Barcelona in the summer. The uncertainty spread for weeks and, even as Atletico celebrated their Europa League title, nobody knew what would happen. This included Griezmann himself. When the players toasted their triumph on the Parc Olympique Lyonnais pitch, he did a live interview with Spanish TV that went well until the journalist asked him about Barça – at which point Griezmann merely ran away.

Just before the World Cup, when Griezmann made his mind up, he announced the news in a documentary produced by Kosmos Studios, a video company owned by Gerard Pique. The film, called The Decision, informed Spanish TV viewers that he would indeed stay. But it also showed how close he came to leaving.

And so if Griezmann has a target for next year, it might be to prove that his decision was correct. Atletico are chasing the league title and might even win it, with Barcelona vulnerable and Real Madrid still wobbling. A worry is that Diego Costa has gone to Brazil for a foot operation, but that will be forgotten soon if Griezmann can deliver in his absence.

Deep down Atletico also dream of the Champions League title, which would alleviate and perhaps even make up for the pain suffered from the final losses in 2014 and 2016.

Such a triumph might also help Griezmann forget lost awards. When asked last week whether he’d ever win the Ballon d’Or, he replied: “If I keep working the way I am, why not?”