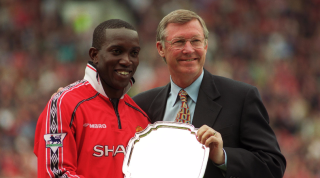 Dwight Yorke was already in Sir Alex Ferguson's bad books when he was spotted out drinking with fellow Trinidad and Tobago international Russell Latapy in May 2001, breaking the club's 48-hour curfew around match days.

When Fergie failed to allocate him a squad number in the close season, Yorke's number was up. He joined forces with the shy and retiring Graeme Souness at Blackburn in August.

Fergie still retained a soft spot for Yorke, saying the striker "was fantastic from day one." Just not in season three.

After being spotted at what was described as a "drug-fuelled" party 36 hours before an FA Cup match in January 2018, Alex Iwobi was hauled over the coals by Arsene Wenger. The midfielder was dismal in a 4-2 defeat to Championship strugglers Nottingham Forest as Arsenal crashed out at the first stage.

Just days before the incident, Jack Wilshere let it be known that the Super Eagles star was the most fined person at the club for poor punctuality. "He was dancing earlier in the gym, he likes to dance,” Wilshere added. Ahhh. It all makes sense now...

Robbie's keen on a quiet night in Dublin

Harry Redknapp was adamant that there would be no festive celebrations at Spurs in 2009. However, skipper Robbie Keane pulled the wool over ‘Arry’s eyes when he led the team off to Dublin, supposedly to hit the greens.

“Wednesday was their day off and Robbie (Keane) told me they were going to Ireland to play golf,' said Redknapp. 'I had no problem with that.”

In actual fact, Keane and no less than 16 first-team players went out to experience the quiet Dublin nightlife.  When they returned, they duly lost 1-0 at home to struggling Wolves and were asked to contribute £20,000 each to a local charity.

In 2010, Sevilla’s Didier Zokora and Ndri Romaric, broke a team curfew by creeping out of their hotel room at around midnight to go nightclubbing just hours before being hammered 5-0 by Barcelona at the Nou Camp..

Gregorio Manzano, their investigative coach, found out about the misdemeanour after asking for the hotel security tapes which caught the escape artists in the act. Both were fined €30,000.

I baptise this child with water (and wine)

Chilean coach Claudio Borghi told a news conference that the players were "in a state not adequate for the Chilean national team, for a professional player".

The “Baptism Five” were banned for a whopping 10 games.

Just four days before meeting the auld enemy at Hampden Park in 1974, Scottish winger Jimmy Johnstone was cast adrift in a rowing boat after a number of late-night drinks in Largs. The coastguard service was needed to rescue the stricken Johnstone as the stolen boat had no rowlocks to take the oars. Subsequently, he was taken out to sea by the tide.

His team-mates serenaded him at breakfast the following morning with a chorus of What Shall We Do with The Drunken Sailor?

The Celtic player was fine for the match on dry land, however, starring in a 2-0 win over England.

It's an Ella'va night, Bobby

England captain Bobby Moore and six others went out for a pint in Lancaster Gate in 1964 the day before flying out to Portugal for a friendly.  When the magnificently tipsy seven, including Banks, Greaves and Charlton, stumbled back to the hotel, they found each of their passports deliberately placed on hotel beds by Alf Ramsey. It was a warning shot that didn’t quite work. Moore and Greaves did it again in NYC when they went to see Ella Fitzgerald in concert.

Ramsey later said of Moore: “I could easily overlook his indiscretions, his thirst for the good life, because he was the supreme professional.”

Vardy was a 20-year-old playing for Yorkshire non-league side Stocksbridge Park Steels when probation officers fitted him with a tag.

He explained: “If the away games were too far, I could only play an hour and they’d have to take me off.

“It was a case of hope we were winning, jump over the fence and straight in my parents’ car to make sure I was home in time. That was for six months.

“You could wear the tag like an ankle guard. There was no way of breaking it, even if you got kicked. You could hit it with a hammer and it’s not coming off!"

Why always me? Mario's costly masala

Roberto Mancini once said that Mario Balotelli was like one of his children.  “You can be upset with him sometimes, but afterwards he's a lovely lad”, said the Italian.

Mancini was certainly mad at Mario when Balotelli broke the club's 48-hour curfew before matches to have a late-night curry in Manchester in December 2011, the day before defeat at Chelsea.

Balotelli did not even try to keep his late night a secret, signing autographs and posing for pictures

He was also said to have engaged in a playful sword fight with one pal using rolling pins. The only things rolling with Mancini were his eyes as he fined the player a week’s wages: £150,000.

England skipper Wayne Rooney was forced to issue a worthy apology after a wedding crasher stint the night after England had beaten Scotland 3-0 at Wembley in a World Cup qualifier in November 2016.

Rooney was photographed on the piano at a plush five-star hangout, but one witness apparently said, 'he was just mashing the keys”. These drunken Rooney tunes prompted a subsequent FA ban on England players going out at all while on international duty.

Jimmy Greaves and his escape room

Greaves left an ailing Chelsea for a cash-rich Milan in 1961, but his heart wasn't really in it. Rossoneri manager Nereo Rocco was particularly austere, ensuring the former Stamford Bridge hero didn’t smoke more than two cigarettes a day or escape the city limits. "He once locked me into my room, so I escaped out of a window, across a ledge, in a hallway window and out to freedom via the main reception," the England striker later recalled.

Greaves didn’t have to ring an emergency number as he was saved by Tottenham boss Bill Nicholson, who paid £99,999 for the striker.