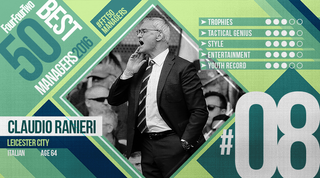 Whoever ‘they’ are clearly don’t agree amongst themselves, but there are elements of both irksome clichés in Claudio Ranieri’s approach at Leicester last season.

The Italian didn’t feature among FourFourTwo’s 50 best bosses last year, when his stock was at an all-time low following a disastrous but overstated spell as Greece boss, but this year it’s impossible not to feature him so high after 2015/16’s earth-shattering feats.

Leicester’s Premier League title was an absolute obliteration of natural order that shook English football to its core, and stuck two fingers up to the notion that the league’s Big Six couldn’t all be bested in the same year – by a team tipped for relegation, no less.

Ranieri inherited a stable situation from his predecessor Nigel Pearson, and he knew it – even if few others thought so, and in reality just staying up was the extent of expectations. It was a team that had won seven of its final nine games of 2014/15 to complete a hair-raising escape from relegation, and made three astute if unspectacular signings in Robert Huth, Christian Fuchs and Shinji Okazaki. N’Golo Kante was added later at the insistence of recruitment head Steve Walsh.

At first, Ranieri merely observed. The Italian changed little in terms of personnel – for starters he only brought in two staff members, keeping Walsh and Pearson's trusted assistant Craig Shakespeare – although by the opening day he'd implemented the season-sensation 4-4-2 from Pearson's season-saving 3-5-2. To begin with he chose to focus on his new team’s strong points: namely, the lung-busting industry that drove that end-of-season survival dash. Still, the 64-year-old whose career (it is often forgotten) had taken in huge, demanding spells with Napoli, Atletico Madrid, Valencia, Juventus, Roma and Inter, was forced to rein in his instincts quickly.

“I arrived in August and started watching the recordings of their games from the previous season,” he recalled. “When speaking to the players, I realised they were afraid of Italian tactical approaches. What football means to an Italian coach is tactics, trying to control the game by following the ideas and systems of the manager.

“They didn’t seem convinced and neither was I. I have a lot of admiration for those who build tactical systems, but I always thought the most important thing a good coach must do is build the team around the characteristics of his players. So I told the players that I trusted them and would speak very little of tactics. It was important to me that they all ran hard, just as I’d seen them running towards the end of last season.”

Ranieri had his players onside early, and they never strayed beyond that line thereafter. Giving them two days off every week helped – Sundays and Wednesdays were freed up, Monday’s training was light, Tuesdays and Thursdays intense, and Friday reserved for tactical tweaking – but when he had their time, they gave him everything.

On the pitch it showed: Leicester’s hard running caught countless teams off guard, their devastating counter-attacks tearing open tight matches that could often have gone either way. The Foxes had their stars, of course – they came to be defined by Riyad Mahrez’s masterful wingplay, Jamie Vardy’s goals and Kante’s cardiovascular conquerings (said Ranieri: “I told him, 'One day, I'm going to see you cross the ball and then finish it with a header yourself’”).

But really, it was a title won by the team that Claudio built. There was an obvious starting XI that the rest of the squad knew was near-impenetrable, but a collective spirit that shone around the bench and beyond too. When the players celebrated their title win at Vardy’s house, Gokhan Inler – of vast experience but, frustratingly for the Swiss, not in the Premier League, where he only made three starts last season – celebrated as keenly as the rest.

What’s even remarkable is just how comfortably Leicester won that title too. While no doubt in part down to the clumsy underachievements of those around them, the Foxes triumphed by 10 points – a feat previously managed by only three Premier League teams (even if Manchester United achieved it four times) and not since Chelsea in 2004/05.

Leicester’s rivals’ failings, however, are also indicative of a changing Premier League: one in which a rising middle class are strong enough to trouble the country’s traditional elite and few matches can be considered straightforward. Yet Ranieri’s side rode on in a way nobody else could, sometimes grinding their way to victory, sometimes completely destroying their overawed opponents.

An underrated high point of Leicester's 2015/16

And yet, even as the matches became more excruciating to watch – five 1-0 victories in six games from late February to early April – the calmest head in every room was Ranieri’s.

He’d shrugged off questions about winning for most of the season, despite secretly believing his team could do it after they’d dismantled Manchester City 3-1 at the Etihad Stadium in February, and arguably it was that vital filtering of title talk out of his dressing room that impressed most about his management last year. Sure, most of his players had been in a title fight before, but not like this.

Even when the title had been won, and Leicester were preparing for their penultimate game of the season against Everton knowing they would lift the Premier League trophy that evening, Ranieri had jokingly threatened to “kill them with my bare hands, I will throttle them” if they eased off for the Toffees' visit. They won 3-1, and should have doubled their tally at least.

“It’s not easy for us,” Ranieri admitted in March. “We are Leicester. We are not a team like Manchester United, Chelsea or Manchester City. We can't say with five points or eight points clear it will be finished.”

He was right about them not being like those other teams. They were winners – his winners.