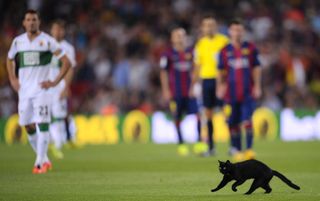 Can Málaga keep their upside frowns under Javi Gracía?

Málaga look a happier bunch without Big Bernado Schuster glaring from the sidelines: it must be like a particularly dense cloud of doom disappearing into the ether. Although the eventual 1-0 win against Athletic Bilbao was a little lucky due an iffy refereeing decision towards the end, nine-man Málaga were good value for the victory.

Celta Vigo could be the sexiest side to see this season

Blimey, that was fun stuff to watch. Although the 3-1 opening win was against the predictably kitten-soft Getafe, Celta Vigo were more than impressive in terms of pace, passion and intensity. “We're going to play this way from the first minute to the last,” promised Eduardo Berizzo, whose side may be bringing it on, cheerleader-style, this season. Woot!

Valencia may have found right path with Nuno

Another season and another new manager for Valencia with Nuno standing opposite Unai Emery’s elbow patches on Saturday in a clash with Sevilla. And what a sparky affair the game was too, with a bit of a history brewing between the two sides, over last season's Europa League semi-final and the fact that both can make a move for fourth place this season.

Valencia are still two or three big signings away from making that spot their own, which must be the goal of new owner, Peter Lim. However, the side from Saturday certainly had some fighting spirit in its toesies having equalised in the final minutes, with 10 men.

Eibar can be the New Osasuna

Those Basque types risking death by hanging out of overlooking flat balconies to catch the big, opening, and dare LLL say it, historic clash would have been pleased as punch by Eibar’s victory over Real Sociedad. A wonderful Javi Lara free-kick almost from the byline gave the La Liga newbies a stunning victory against their neighbours. Three points are always going to be tough to pick up, but the “wet Wednesday night against Osasuna” might be relocated slightly westwards to iron-clad Eibar.

Poor Gorka Iraizoz. The Athletic Bilbao keeper popped in an injury-time equaliser at Málaga, only for meanie-head referee Mateu Lahoz to rule it out and give the home side the 1-0 win in La Rosaleda. The decision was for a perceived offside, but the call looked a bad one to LLL’s beady, blood-shot eyes.

With rather important Champions League action against Napoli to come, Athletic’s performance against Málaga was predictably flat, although Iker Muniain looked in fine fettle with some thrusting runs and by managing to get Duda sent off in a tremendous fit of rage.

Just the 2-0 win for Real Madrid, which caused a certain amount of disgruntlement (as ever) in the demanding Santiago Bernabéu stadium. Córdoba dutifully came out to play, following the tradition that if you frustrate Real Madrid enough in their own domain then the fans get on top of their team. In the end, the result was a no-frills performance, and considerably better than Madrid's opening match last season, which nearly saw a shock defeat to a rampant Betis.

Merry Messi is back in action

It was a lovely evening at the Camp Nou. First off, the opening seconds of the Barcelona-Elche game were interrupted by a kitty-cat running around the pitch, and everyone loves seeing stewards chasing wildlife in the manner of Benny Hill.

Then Leo Messi had a chance ruled offside, and instead of last season’s grumpy scowl, a big smile stretched across the wee striker’s face. The eternal frown of last year had gone; that’s quite a turn-up for the books considering what happened to the Argentine in Brazil.

The smile was even bigger later on, with hair-ruffling aplenty by team-mates when Messi bagged a brace. The 3-0 victory was Barcelona “down to the bare baaaanes” with Gerard Piqué, Luis Suárez, Neymar and Pedro all unavailable from the starting line-up, but the performance was perfunctory enough to keep everyone happy.

It’s a marathon not a sprint for Atlético. Luckily

It was business as usual for Atletico Madrid at the back against Rayo Vallecano, with the first of what should be many a clean sheet this year in a hard-fought 0-0. Indeed, the form of Thibaut Courtois' replacement (one of them, anyway) Miguel Angel Moya has been rather impressive so far. The issue for the league champions was that there was nowt going up front, with Mario Mandzukic missing a couple of chances.

However, La Liga Loca is going to side with Diego Simeone - the very suspended Diego Simeone - with the observation that two rather big games with Real Madrid, combined with a battle against an ever-feisty Rayo Vallecano, is always going to mean some heavy legs. “We played on Tuesday and Friday and it is logical that the effort would catch up with us in the second half,” said the Argentine coach.