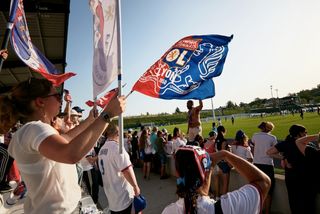 This feature first appeared in the January 2020 issue of FourFourTwo. Subscribe now and get every issue for less than £3.80

The sun is so ferocious that hordes of people have decided to desert Lyon and make their way south to the French Riviera for the weekend. However, for loyal supporters of the most dominant team in world football, the insane temperature is not a deal-breaker.

At 3.30pm, an hour before kick-off and half an hour before the turnstiles open, the faithful followers of Olympique Lyonnais Feminin gather near the Groupama OL Training Centre in Decines-Charpieu, just a short tram ride from the city centre.

The OL Ang’Elles, official supporters’ group of Lyon women’s team, have set up shop on the dusty ground opposite the training centre’s gates. An A4 sheet of paper urges people to subscribe to OL Ang’Elles and access their team’s games at a reduced rate. Blue and red scarves hang from a Hugo Boss hanger, with an €18 price tag taped to them. A young man waves a huge OL Feminin flag that will later be attached to a fence inside the training centre.

It’s a pretty makeshift setup for a side that wins titles more than any other football team on the planet – an astonishing 14 straight league crowns and four Champions League trophies in a row, to be precise. Unlike Real Madrid or Barcelona in the men’s game, or even Liverpool and Manchester City over the past few seasons, Lyon have managed to sustain success both domestically and in Europe.

You only have to wander through the Olympique Lyonnais museum, which opened in 2018 beneath the Groupama Stadium, to see how emphatically the women have stolen their male club-mates’ thunder. There are various tributes to former favourites – among them Juninho Pernambucano, Karim Benzema and Alexandre Lacazette – a nod to the men’s team reaching the Champions League semi-finals in 2010 (a feat replicated this year), and a celebration of their seven league titles. But the men haven’t won Ligue 1 since 2008, whereas Lyon’s leading ladies have finished on top in every single season since 2006. It’s almost exhausting.

OL Feminin’s relentless success is down to their visionary president, Jean-Michel Aulas. He took control of Lyon back in 1987, and in 2004 turned his attention to relaunching the women’s team on an equal footing with the men. Aulas was incredibly ambitious: he intended to create a footballing Harlem Globetrotters, by making it impossible for the world’s best players to turn Lyon down. He wanted to build a team that was brilliant, untouchable and a joy to watch.

A fundamental move was choosing to pay the women better wages. The average OL Feminin player allegedly earns €162,000 per year, and it’s rumoured that Hegerberg receives an annual salary nearing €500k. Of course, that barely compares to the average €1.8 million per year earned by Lyon’s men, but then Lewes are the only club in the world who give their men and women the same budget.

Aulas also decided that the women should play all of their big games at the Groupama Stadium, which has a capacity of just under 60,000. That’s more unusual than it sounds: Brighton’s women play nearly all of their matches at Crawley, for example, which is half an hour away from the city. When they faced Arsenal at the Amex Stadium towards the end of 2018-19, a record crowd of 5,265 attended. Lyon’s private plane is for both teams, meanwhile, as is the team bus. The women sit with the men to eat their lunch – they eat the same food, which is cooked by the same chef.

On this baking afternoon, Lyon are facing Fleury – based near Paris – in the league. It’s a smaller match, relatively speaking, which means staging it at the training ground: capacity approximately 1,500. When the doors finally open, fans dip their heads under taps, soak their caps in water and greedily pour bottled water down their throats. As they unfurl flags and fill the single stand that runs the length of the pitch, FFT is grateful for the shaded press box, with its smattering of fold-up chairs and shelf just about wide enough to fit a laptop.

The team-sheet is impressive, as expected, listing Bronze and Renard in defence, Marozsan in midfield, Hegerberg in attack and Nikita Parris, the newly-signed England forward, on the substitutes’ bench. This is the third game of the season, and Lyon have already beaten Marseille 6-0 at home and Stade Reims 8-3 away. Fleury, languishing towards the bottom of the table, have conceded seven goals and scored two. Everyone knows what’s coming.

As Bronze – an elite athlete with obsessive drive, determination and grit – warms up, the fans chant, “Lucy! Lucy! Lucy!” They stamp on the metal stand, making it reverberate loudly. It isn’t quite as mesmerising as watching Barcelona fans jump up and down in unison behind one of the goals at the Camp Nou, but the Lyon supporters make a decent racket for what is a fairly small crowd. Apparently oblivious to the heat, their ultras at one end of the stand don’t stop singing and bouncing for the entire 90 minutes.

In the first half, mercurial Germany international Marozsan nets two goals and 167-cap France forward Eugenie Le Sommer adds another. Lyon are elegant and confident, and of course they expect to win, but the fans are nonetheless ecstatic as they chant their players’ names and rattle the stand. There’s plenty more to cheer after half-time, as Le Sommer, centre-back Griedge Mbock Bathy and England midfielder Izzy Christiansen score. The game ends as it did against Marseille: 6-0.

As ever, Lyon’s players have stepped onto a pitch believing they are the best football team in the world. It’s the kind of profound self-belief that gets results. Up against one of the best defensive line-ups on the planet – Bronze, Renard, Mbock – Fleury don’t stand a chance.

Watching Lyon’s galacticos take the opposition apart, you can’t help but ask if the hosts are just too good. The French league is dominated by OL and Paris Saint-Germain, who expect to win and score plenty of goals doing it. Over the previous five league campaigns, Lyon’s record was P110 W103 D6 L1 with a goal difference of +531. PSG are similarly rampant at racking up goals and wins, but they can’t quite catch Lyon.

After the match, FFT watches as Hegerberg patiently signs a dozen autographs for a group of excitable youngsters, and then ask her just how much she is challenged by a relatively easy victory. “No game is ever easy,” she says, amiably. “It was incredibly hot out there for both teams, so we had to be smart about the way we played, be efficient in everything we did, and keep the ball.”

Hegerberg, whose older sister Andrine played for PSG until last July, no longer turns out for Norway. She explained in 2018 that while her country had a fine history of women’s football, it had stopped talking about its development and allowed other countries to overtake them. When we ask if the star striker will ever represent her nation again, she simply says, “No comment”, before going on to praise president Aulas for “providing a good model in terms of attitudes to women’s football” and “showing the way for other clubs”.

When Hegerberg – who last October became the Women’s Champions League’s all-time record goalscorer, at the age of just 24 – received the inaugural Ballon d’Or for women, presenter Martin Solveig infamously asked her if she could twerk. It was his dodgy move, not her imperious form, that dominated the headlines – but Hegerberg herself prefers to focus on the bigger picture.

“The award has such a big place in football history that of course it matters for women to be included,” she tells FFT. “It shows how little women were valued in the past and how that is changing now. Lyon are creating academies for young girls and offering the kind of setup that I dreamed of as a kid. There’s no reason for clubs not to invest in girls in the same way that they invest in boys.”

Hegerberg has been at Lyon since 2014. For England forward Parris, this is only the beginning. She is the third player to leave Manchester City for Lyon, after Bronze and Christiansen (now back at Everton), and departed on a high by winning both the FA Cup and League Cup – not to mention the 2019 Football Writers’ Association Women’s Player of the Year award. She scored on her debut in the 6-0 destruction of Marseille, but knows that she’s not yet an automatic choice to start.

“The level of play is unbelievable – everyone is fighting for a place,” explains the 25-year-old, still catching her breath. “The quality of the Lyon team is there for everyone to see, from No.1 to No.11. But every team we play wants to put up a fight, so we always have to be at the very top of our game.

“For me, obviously it’s a different country, culture and style of play, and I’ve got to adapt as quickly as possible.”

It’s impossible not to wonder just how much England will profit from Parris, Bronze and Christiansen’s time at Lyon, with the trio also joined last summer by Manchester United left-back Alex Greenwood. Bronze was crushed when the Lionesses narrowly lost their 2019 World Cup semi-final, but the tournament raised the profile of football in England to such a level that a November friendly against Germany at Wembley sold out.

Parris is unequivocal about taking her experience of Lyon’s winning mentality into England games. “It’s why I wanted to come here,” she tells FFT. “I need to learn how to have a leadership role, because I’m edging towards old age now.” She chuckles, her eyes bright.

“OK, I’m only 25, but I want to lift England to a World Cup final, a Euros final or an Olympic final. I’m learning from the best every day at Lyon, so that I can go back to England and win with them, too.”

All aboard the Eurostar…

Amy Raphael has been writing about pop culture and sport for 25 years. Her book, ‘A Game Of Two Halves’, is available to buy now’