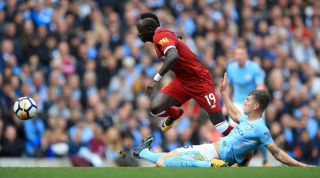 The big talking point: Alvaro Morata’s form. The Spaniard suffered a dreadful night at the Emirates in the league this month and wasn’t much better against Arsenal in this week’s League Cup semi-final against the same opposition. The goals have to start going in.

What will happen: Jamie Vardy is still out, sidelined until next week at least, so Islam Slimani should start again at the top of Leicester’s formation. Look for Claude Puel to shift Riyad Mahrez around, too, perhaps to allow a more defensive player to face Marcos Alonso on the Leicester right.

What won’t happen: No debut for Ross Barkley, who is ready to return to training but who hasn’t played since last May. While there's an outside chance of seeing him from the substitutes' bench, fitness should prevent him from starting for a few weeks yet.

The big talking point: Palace’s form. The loss to Arsenal remains Roy Hodgson’s only defeat since losing to Tottenham at the beginning of November (12 Premier League games). It hasn’t been the most stylish revival, but it’s certainly been real enough.

What will happen: By the time this game kicks off, Burnley will have been without a win for a month and a day. Since beating Stoke on 12 December, Sean Dyche’s players have lost two, drawn three, and also exited the FA Cup. They remain a long way from a crisis, but losing here would see their early season form dissipate further - and Dyche will have to arrest that decline without Ben Mee or James Tarkowski, although new loan signing Georges-Kevin Nkoudou should be included.

What won’t happen: A whole raft of Palace players won’t feature. Scott Dann and Jason Puncheon are likely out for the season, while Ruben Loftus-Cheek, Andros Townsend, Mamadou Sakho and Jeffrey Schlupp are all sidelined, too.

The big talking point: Forwards. Or at least West Ham’s intention to listen to offers for their forwards. Javier Hernandez is reportedly for sale, Diafra Sakho looks to be heading for Selhurst Park, while Andy Carroll’s future is also uncertain.

What will happen: Alex Pritchard (£11m from Norwich) should be signed in time to play some part for Huddersfield. An interesting player, Pritchard was long expected to make the breakthrough at Tottenham - particularly given Mauricio Pochettino’s commitment to academy products. It didn’t happen, but he’s rebuilt his reputation in the Championship and that transfer fee really isn’t as silly as it sounds. Tricky and skillful, with a low centre of gravity, Pritchard should prove fun to watch.

The big talking point: In the wider sense, it's Amanda Staveley's pending takeover at St James' Park, which seems to be moving at a glacial pace. The more pressing concern is relegation, though. Swansea desperately need a result of any sort, but Newcastle remain just two points above 18th-placed Stoke. Nervy.

What will happen: Swansea should show further signs of improvement. The win over Watford was an excellent result and, although they ultimately lost to Tottenham at home, they exhibited signs of life which they hadn’t shown for months. It’s still a game which Newcastle should win, but it’s not quite the banker it would have been a month ago.

What won’t happen: Carlos Carvalhal won’t be able to construct a familiar looking midfield for the away side. Renato Sanches is the latest to limp into the treatment room, while Ki Sung-yueng continues to be unavailable.

The big talking point: The traditional Watford slump: one win in seven for Marco Silva, whose side are threatening to prove their strong start a false dawn.

What will happen: Recriminations. Not that Mauricio Pellegrino is in any better shape. He’s actually by far the more vulnerable of the two managers and Southampton could well be in the relegation places by 5pm on Saturday.

What won’t happen: Southampton are not an expressive team under Pellegrino - he got the job off the back of the fine defensive reputation he built for himself at Alaves - so don’t expect anything too ambitious here. Watford are a fearful side at the moment, chastened by recent experiences, so the smart move for the visitors would be to shut the door and hope the hosts cough up a mistake.

The big talking point: New manager bounce - or lack thereof. Alan Pardew’s greatest managerial strength is in creating short-term improvement. The bad news for West Brom? They’re yet to win a league game since he arrived.

What will happen: *James Alexander Gordon voice* “West Bromwich Albion nil, Brighton and Hove Albion nil…” . There, now we've jinxed it, you can thank us for the six-goal thriller to come. Possibly.

What won’t happen: Nacer Chadli is still out for the hosts, while Matt Phillips and Kieran Gibbs are both unlikely to start.

The big talking point: Allardycian improvement. Everton are certainly more solid under new management and, given the way in which other sides have frustrated Tottenham at Wembley, another backs-to-wall organisation-athon seems inevitable here.

What will happen: Either Spurs will get an early goal or a highly familiar routine will emege. Energy turns to frustration, neat passing becomes hopeful and direct – so a fast start is imperative for Mauricio Pochettino. At the other end of the field, Cenk Tosun is likely to start after completing his move from Besiktas, finally giving Everton the threat they've lacked all season. Whether Tosun's arrival alters Sam Allardyce's approach remains to be seen, but it will provide the opportunity for more proactive football.

What won’t happen: Seamus Coleman has returned to training, but is not yet in content for a return. Harry Winks and Danny Rose remain out for Spurs, with both expected back before the end of the month.

The big talking point: The futures of Alexis Sanchez and Mesut Ozil, both of which would seem to be away from Arsenal. Sanchez began the League Cup semi-final on the bench on Wednesday night, while Ozil has been required to see a specialist over a knee problem. The German won't make this game, but - if Sanchez appears - this could prove to be the Chilean's last game in red and white. This shade of red and white, at least.

What will happen: This should be a building block game for Arsenal. They’re winless since 28 December (Crystal Palace), but late January is kind to them: home games with Everton, a visit to lowly Swansea, and the return match with Palace at the Emirates. This would be a timely moment to recapture some momentum against a fragile Bournemouth.

What won’t happen: It doesn’t look like Jack Wilshere will be available. A promising run of form ended on Wednesday night, with the midfielder limping off at Stamford Bridge. Bournemouth will continue to be without Junior Stanislas and Jermain Defoe, while Josh King continues to struggle with repetitive muscle injuries.

The big talking point: Oof. This will be a game: Guardiola’s artistic ballers versus Klopp’s high-octane, pace-based attack. The method and the madness.

What will happen: Liverpool, Anfield, live on TV; the conditions are right for City's winning run to come to an end. But are Liverpool actually equipped to stop City? Probably not. Virgil van Dijk makes them a sturdier defensive proposition, certainly, but there are still too many holes in that home backline and City - albeit without Gabriel Jesus - are well stocked with the tools to exploit them. Guardiola's players will have to resist a home surge at some point, but their attacking weight should prove the difference.

What won’t happen: Jordan Henderson will be missing, which presents Klopp with a problem: how to disrupt City’s possession without a recognised central midfielder? Mohamed Salah is also an injury concern, which would be an altogether different - and more serious - issue to overcome.

The big talking point: The win over Everton took Manchester United back up to second but, with away trips to Turf Moor and Wembley coming either side of the FA Cup tie with Yeovil, Jose Mourinho could certainly do with something straightforward here.

What will happen: He’ll get it. Peter Coates waited so long to remove Mark Hughes that Stoke have fallen into complete disrepair, with not a single department of their side functioning as it should. Manchester City scored seven against them, Spurs and Chelsea each got five, so a trip to Old Trafford won’t do their goal difference - which is the worst in the Premier League - much good at all.

What won’t happen: Stoke’s problems can’t be condensed down to a single issue, but they are enduring a defensive crisis. Ryan Shawcross, Erik Pieters and Bruno Martins Indi are all out of this game. Glen Johnson too, so caretaker manager Eddie Niedzwiecki might just want to get this one out of the way.