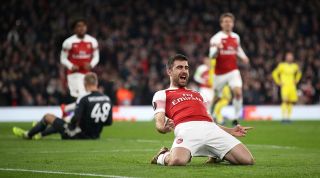 Arsenal need a big comeback against Rennes on Thursday if they hope to keep their Europa League dream alive.

Despite losing the first leg in France, they did get a vital away goal that could help the Gunners through to the quarter-final stage once again.

Success in Europe was the one thing that eluded the north Londoners during Arsene Wenger’s 22 years in charge – a period in which they won every domestic trophy going.

But so far Unai Emery has overseen a comfortable transition period, Arsenal are still in Europe this season and challenging for the top-four Premier League spot which would secure a return to the Champions League.

So today we’re asking you to name the last 50 Arsenal players to net during European competitions. The list includes both Champions League and Europa League, and takes us all the way back to April 2009 when they were taking on Villarreal in the quarter-finals of the Champions League.

We’ve given you eight minutes – see if you can get all 50, and let us know how long was left on the clock at @FourFourTwo to see how you compare to everyone else. Good luck!

QUIZ! Can you name these 20 Champions League winners?