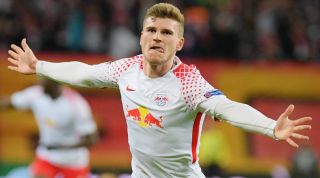 The 18-year-old Gouiri may not have the first-team experience of many others on this list, but he has the potential to be one of the best strikers in the world. Utterly prolific at youth level for France, he has been around the Lyon first team squad for 18 months and is being gradually eased into action for the senior side.

Les Gones are enjoying a strong season and boast some of the most exciting young players in European football, most notably 19-year-old midfielder Houssem Aouar and the sensational Tanguy Ndombele. Even captain Nabil Fekir is only 24. Gouiri is in the right place to develop – Frederic Kanoute, Karim Benzema, Anthony Martial and Alexandre Lacazette all started out at Lyon.

The striker scored five goals at the Under-17 World Cup in 2017 despite France being eliminated in the last 16. He also found the net eight times at the U17 Euros as les Bleus were beaten by Spain in the last eight. Armand Garrido, coach of Lyon U17s since 1992, says Gouiri “has a little bit of everything”.

Borussia Dortmund and Sweden striker Isak has inevitably been compared to compatriot Zlatan Ibrahimovic. The 18-year-old scored on his competitive debut for AIK in a cup match and found the net on his league debut for the Stockholm side too, becoming their youngest ever goalscorer in the Swedish top flight at 16 years and 199 days.

He chose Dortmund ahead of reported suitors in Bayern Munich, Manchester United, Chelsea and Liverpool – and is in an ideal place to flourish. Isak is playing alongside a host of other exciting young players including Jadon Sancho, Christian Pulisic, Mahmoud Dahoud and Manuel Akanji.

Starting so few matches since his move to the Bundesliga last summer may harm his chances of going to the World Cup, but with an international goal to his name already, the 6ft 3in Swede is definitely in the frame.

The Juventus striker is currently on loan at Hellas Verona, where he has shown his qualities at the top level by scoring goals against Fiorentina, Torino and Milan in Serie A this season. Kean became the first player born in the year 2000 to appear in one of Europe’s big five leagues when he made his debut for Juventus last season in a match against Pescara, and made his Champions League debut against Sevilla at the tender age of 16 – another year 2000 record.

Such a rapid fast-track was understandable when you consider that the Italian forward has 24 goals in 26 matches for the Juventus U17 side. He only turned 18 in February, and has quite the future ahead of him.

With Arp’s Hamburg side in the relegation zone and time running out to preserve their Bundesliga status, expect a real scramble for the 18-year-old’s signature this summer.

The forward has been prolific at youth level for club and country, scoring 18 goals in 19 appearances for Germany’s U17s. He has already been linked with Juventus, Borussia Dortmund, Spurs and a host of others, but most recent reports suggest a move to – hold the shock – Bayern should Hamburg be relegated.

Early comparisons with Harry Kane are justified: Arp is capable of scoring every kind of goal, is most comfortable leading the line and – as his two hat-tricks in the group stage of the U17 Euros in 2017 show – he can turn a match on his own. He followed that up with five more at the U17 World Cup later in the year, and became the first player born this millennium to score in the Bundesliga with a goal against Hertha Berlin last autumn.

Brazilian forward Vinicius has already sealed a big-money move to Real Madrid, who he will join following his 18th birthday in the summer. The best player and top goalscorer for Brazil at the U17 South American Championship in 2017, Flamengo's forward scored seven times as Brazil lifted the title for the 12th time in their history.

At club level he has already had a positive impact, coming off the bench to score twice as Flamengo beat Ecuadorian giants Emelec in the Copa Libertadores group stage in what was his competition debut. Real Madrid’s €45m investment may yet prove to be a bargain.

For a nation of just over three million people, it’s incredible how Uruguay manage to churn out so many top footballers – in particular, goalscorers. Luis Suarez has 50 international goals, Edinson Cavani is on 42, while Diego Forlan (still playing scoring goals in Hong Kong with Kitchee) has netted 36 times.

Forlan retired from international football in 2014, while the other two are 31 years old and moving into the twilights of their careers. Step forward Maxi Gomez of Celta Vigo in Spain, the baby-faced and barrel-chested Uruguayan star of the future.

The 21-year-old has taken La Liga by storm, quickly carving out a reputation as a big-game player with goals against Barcelona and Real Madrid – turning defeats into draws on both occasions. Gomez made his debut for the national side in late 2017, in a friendly against Poland.

Dembele has been the subject of intense transfer speculation that will surely intensify this summer, with the 21-year-old’s goals firing Celtic towards another league title. The French forward came to the fore last season with five goals from 12 appearances in Europe, including a brace against Manchester City in Celtic’s 3-3 draw.

Goals have been more difficult to come by this season for marked man Dembele, but his record is largely very good at club and national level with eight goals in 12 appearances for France U21s.

With links to the likes of Manchester United, Marseille, Chelsea and Roma (plus a reported offer from Brighton turned down in January), it's been suggested that his recent struggles could be a result of the player having his head turned.

Valencia striker Mina has already got over 150 games under his belt with los Che and previous side Celta Vigo, but it’s this season that he's really come to the fore – the Spanish forward has scored 11 Liga goals in just 13 starts.

Mina is linked with a move up the east coast of Spain this summer to Barcelona, a route he'd be following after the likes of David Villa and Paco Alcacer should the Blaugrana firm up their interest.

He’s technically very good, protects possession well, is tactically and positionally flexible, an excellent passer and has an eye for goal. There’s also an awful lot of room for improvement, having only turned 22 in December.

It’s not been an easy start in the Italian capital for Czech striker Schick, but there are a number of reasons why Roma paid what may turn out to be a club-record fee last summer. If all bonuses are met, Schick’s transfer from Sampdoria will cost €42m, eclipsing the €36m the Giallorossi paid for Gabriel Batistuta in 2000.

When Schick was linked with Juventus before he opted for Roma, Czech national team legend Pavel Nedved compared him to the Zlatan Ibrahimovic that arrived in Turin in 2004; raw but technically outstanding, and offering a physical presence too. Others have compared him to compatriot Jan Koller, who notched 55 goals for the national team.

While goals have been few and far between at club level, the 22-year-old scored on his international debut for the Czech Republic and added another in 2018. Injuries permitting, he will be their No.9 for the foreseeable future.

Racing Club’s Martinez made his debut for Argentina earlier this year, replacing Gonzalo Higuain in their humbling defeat to Spain in Madrid. It was at once terrible and excellent timing for the prolific 20-year-old, who debuted at the perfect time to receive a call-up for the World Cup this summer – but in a match he was unlikely to be able to make any meaningful impact in.

However, the buzz around the 20-year-old is real. His 11 goals in 10 appearances for Racing before that international break show just how prolific he can be.

Seven goals in 12 Serie A starts, plus another six in the Europa League this season for Milan, constitutes an excellent campaign for 20-year-old Cutrone – a Rossoneri player since he was eight.

Cutrone is probably the truest No.9 on this list; a clinical finisher who plays on the shoulder of the last defender and is positionally excellent. He’s drawn comparisons to the purest of all poachers, Pippo Inzaghi, who coached him for a couple of seasons in the Milan youth teams.

Cutrone made his senior debut for Italy earlier this season, and with the national team in transition following their failure to qualify for the World Cup, he looks set to be part of a new-look Italy for a long time. When capped at youth level by the Azzurri, he has usually delivered – Cutrone has been prolific at every level from U15 to U21.

Rashford will go to the World Cup with experience of a major international tournament already behind him, having been selected in Roy Hodgson’s Euro 2016 squad. Seventeen caps for England and more than 100 Manchester United appearances have all come before his 21st birthday, making for a whirlwind start to his career for club and country.

Although his preferred position is through the middle, Rashford has been mostly used out wide and his goal contributions have suffered as a result. However, he has played a big part in League Cup, FA Cup and Europa League victories since breaking into United's team in 2016. The best is certainly yet to come for the rapid 20-year-old.

Werner has improved exponentially since his 2016 move to RB Leipzig from hometown club Stuttgart. The 22-year-old is a thoroughly modern striker; quick, hard-working, selfless and prolific. He’s comfortable up top on his own or as part of a two, and equally adept as a No.9 or support striker.

Werner has caught the attentions of Europe’s top clubs and a summer move is looking increasingly likely, despite the player stating he would be happy to remain in Leipzig.

Joachim Löw will favour Werner over renaissance man Mario Gomez in the summer if both are fit and in form. Given the strength of Germany's squad, Werner may well add a World Cup to his trophy collection before his 23rd birthday.

In his first full season, Jesus has won the League Cup and Premier League title to add to his Olympic gold medal from 2016. Not bad for a player who celebrated his 21st birthday in April 2018.

The 21-year-old's seven goals in qualification helped fire Brazil to the World Cup too. They topped the South American qualifying table – a whopping 10 points clear of second-placed Uruguay – and lost just once in 18 games. That was their first game... when Jesus wasn’t called up to the squad.

Europe’s Golden Boy award winner, the second-most expensive player in history and nailed on for France at this summer’s World Cup in Russia – it’s easy to forget that Mbappe is just 19 years old.

Ranked! The 10 best players in the Championship

After a seminal season in 2016/17, where the youngster's goals helped Monaco to the Ligue 1 title and semi-finals of the Champions League, PSG brought him home to Paris last summer. Mbappe has helped form a fearsome front three with Neymar and Edinson Cavani since, having been compared to both Thierry Henry and Brazilian Ronaldo from a very early age.

He's already scooped the 2018 Ligue 1 title and Coupe de la Ligue with his new club, meaning he’s won league titles with two different clubs before his 20th birthday. Is there a World Cup on the horizon too?