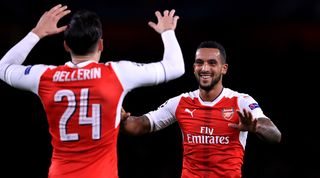 Research from the excellent CIES Football Observatory has evaluated the most productive training clubs across Europe (defined by UEFA as having tutored players for at least three seasons between the ages of 15 and 21 who then go on to play in the top-five leagues).

It's particularly good news for Athletic Bilbao and Real Sociedad, two of La Liga's Basque representatives who are not only producing players at a healthy rate but also keeping hold of them for their first team too. The likes of Antoine Griezmann, Ander Herrera and Javi Martinez may have transferred away from both since 2012, but, in particular, Athletic's Basque-only policy hasn't affected their ability to compete domestically and in Europe.

Manchester United are the Premier League leaders for players produced (34), six of whom are still at Old Trafford. Arsenal can count on nine of their homegrown stars (of 22); Tottenham five of 17, level with Southampton (of 13 altogether, though the Saints' illustrious alumni include Gareth Bale, Luke Shaw, Theo Walcott and Alex Oxlade-Chamberlain). Manchester City sneak in with one of 12, but Liverpool don't even make the top 50 (the cutoff is 11 players produced).

Chelsea, meanwhile, may have won five of the last seven FA Youth Cups but provided only the same number of players (13) to Europe's top five leagues as Sochaux in France's second division, and Empoli of Italy. What's more, only three of them – Nathaniel Chalobah, Ruben Loftus-Cheek and Ola Aina – have been considered for the first team this season.

Special mention to Germany's 1860 Munich, who haven't been in the Bundesliga since 2004 yet developed 15 players for current big European sides including Julian Weigl, both Bender brothers and Fabian Johnson, thanks to a solid catchment area. Roma, Monaco and Rennes, meanwhile, are all prolific producers but don't often retain their talent.

Check out the full data below.