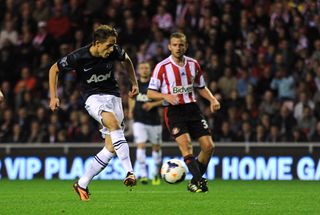 Silva worth weight in gold to City

David Silva has endured a stop/start opening few weeks of the new season, with a thigh injury restricting him to just three starts in City's first nine matches.
City did manage a couple of big wins in the Spaniard's absence - 3-0 at Viktoria Plzen and 4-1 over Manchester United - but on other days missed his guile and craft in attacking areas.

Starting for the first time since August, Silva was the star of the show in Saturday's early kick-off against Everton. The playmaker lived up to his job title, completing more passes than any other player on the pitch, he also completed more attacking third passes and created more goalscoring opportunities for team-mates.

For a team that have made so many changes to both their playing and coaching staff, City have started the season relatively well. Having the creative spark of Silva in the side on a regular basis will help them find the level of consistency they'll need to push for the title.

Loic Remy may have scored the two goals that won Newcastle three Premier League points at Cardiff on Saturday afternoon, but the Magpies' star man wasn't the French striker, rather his compatriot, Yohan Cabaye.

The once want-away midfielder did his bit at both ends of the pitch, with his defensive contribution as important as his good work at the other end. Had the long-range free-kick which hammered the post in the first half found the net, it would have been the perfect afternoon.

Do this more often, and Newcastle fans may forgive his summertime shenanigans.

Fulham were desperate for three points in their home match with Stoke - not least as their former boss, Mark Hughes, was in the away dugout. Yet star man Dimitar Berbatov didn't have one of his better days. The Bulgarian struggled to make a real impact, not even managing a shot in just over an hour.

Eventually he limped out of the match after being caught by Glenn Whelan, and Darren Bent took his place.

The on-loan Aston Villa striker made the most of his run-out, scoring the only goal of the game despite not seeing to much of the ball.

Could the England man's efficiency see him replace Berbatov in Fulham's starting XI in the not-too-distant future?

Without question, Saturday's dullest Premier League game came at the KC Stadium, where Hull and Aston Villa ambled to a goalless draw.

Over the 90 minutes, the two teams attempted a total of 52 crosses between them, with only 9 finding a team-mate, and only 3 of those leading to a goalscoring chance.

Compare that to passes in the final third - the two teams made 222 attacking third passes, with 124 finding a team-mate, leading to 11 goalscoring chances. The more considered approach was quite clearly getting better results.

Perhaps had one or other team had a little more patience and resistant hurling the ball into the box, there would have been a winner.

Are Suarez and Sturridge really telepathic?

Speaking after Liverpool's impressive 3-1 win over Crystal Palace, "I thought Luis Suarez and Daniel Sturridge were excellent; their link up play was great. It’s almost a telepathic understanding between the two."

The pair exchanged 10 passes over 88 minutes against Palace. This may sound a low number, especially as Liverpool dominated the match with 61.5% possession, but it was more than the strike partnerships of Manchester City, Manchester United and Newcastle managed in their respective Saturday victories.

There can be no other talking point from Manchester United's tea-time victory at Sunderland than the performance of Belgian youngster Adnan Januzaj.

The 18-year-old - born with the Rednex 'Cotton Eye Joe' sat atop the charts - saved under-pressure David Moyes' bacon with two brilliantly-taken second half goals that turned a match in which United appeared to be labouring on its head.

After a testing couple of weeks, credit should go to Moyes for having such faith in a previously untested rookie.