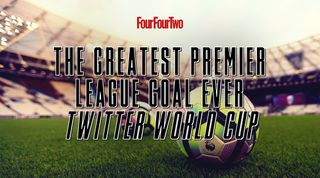 After three months, a lot of discussion, an interlude of Bundesliga football and a lot of hype, the greatest league on Earth returns tonight.

So to celebrate, we thought we’d look through the archives - but with a little twist.

There have been plenty of goals scored over the years in the Premier League. Mazy runs, half-line lobs, stunning volleys and unique pieces of skill have delighted us and bedazzled. But what’s the greatest goal in Premier League history?

We’ve whittled it down to a mere 16 - an impossible feat that no doubt excludes your favourite, but that’s a risk we’re willing to take. From our shortlist below, we want you to choose the best goal ever.

Voting for the group stage begins at 11am. You can catch the quarter-finals between 12pm and 1pm - the semi-finals then have a two-hour window of 1pm-3pm. Our grand final is between 3pm and 5pm. Hop over @FourFourTwo on Twitter to vote throughout the day.

And the nominations are...

Matty Taylor - for Portsmouth against Sunderland, 2005

Emre Can - for Liverpool against Watford, 2017