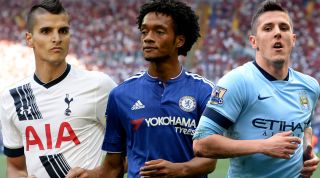 “The curious thing about [Mario] Balotelli,” said football writer and Sky Italia pundit Mario Sconcerti when Milan sold the striker to Liverpool in August 2014, “is that champagne corks are popped when he arrives but also when he leaves.” Just over 12 months on, it's safe to say that the £16 million capture of Balotelli didn't at all work out for the Reds. A return of just one Premier League goal was bad enough; when coupled with a poor attitude, lack of work ethic and unsuitability to Brendan Rodgers’ system, the move was nothing short of catastrophic. Somewhat surprisingly, Milan have agreed to take Balotelli back on a season-long loan, with Liverpool seemingly so desperate to get him out of the club that they did not ask for a loan fee and will pay a sizeable amount of the Italian’s wages while he is at San Siro.

While Balotelli’s character makes it difficult to draw comprehensive conclusions from his fateful spell at Anfield, it is interesting to observe that numerous recent signings from Serie A haven't worked out as well as Premier League clubs would have hoped. Former Fiorentina pair Stevan Jovetic and Juan Cuadrado have both returned to Italy after failing to make an impact at Manchester City and Chelsea, while, according to some reports, Tottenham were prepared to let ex-Roma winger Erik Lamela join Marseille until injuries to Andros Townsend, Christian Eriksen and Mousa Dembele persuaded Mauricio Pochettino to veto the deal.

Although each case takes place within unique circumstances and contexts, and there are thus different explanations as to why a player didn't live up to expectations, it is notable that recruits from a league that once supplied the English top flight with Thierry Henry and Gianfranco Zola, Dennis Bergkamp and Marcel Desailly, Fabrizio Ravanelli and Patrick Vieira, have generally been underwhelming in recent times.

Matteo Darmian has started well at Manchester United following his move from Torino and Philippe Coutinho – who, curiously, was never rated that highly in his five years in Italy with Inter – continues to improve at Liverpool but, in the main, modern-day signings from Serie A have been disappointing.

There are many possible reasons why. Serie A is no longer the systemically defensive, goal-shy competition that it's regularly made out to be (indeed, last season it averaged 2.69 goals per game, second only to the Bundesliga among Europe's top five leagues), but there are undeniable stylistic differences between the top tiers of Italian and English football.

The Premier League’s thrill-a-minute intensity means that physical attributes are often coveted, whereas the more considered approach of many Serie A sides leads to a greater emphasis on tactics and out-thinking the opponent. Much of the dissimilarity boils down to variances in footballing culture between the two countries, and can have a major effect on the type of player that succeeds in each respective division.

Multiple stars who have flourished overseas have struggled to adapt to the speed of the Premier League.

Lamela himself admitted to having trouble adjusting a few months after he moved to Tottenham in the summer of 2013, suggesting that the English top flight is “not necessarily more difficult... just different”.

“I feel good here, although getting used to life [in the Premier League] in every sense is a completely different thing,” Lamela said. “I need training, a bit of rhythm, some games. English football is very different from the game in Italy – much more physical, whereas Serie A is more tactical.”

While the Argentine hasn't been a total disaster at White Hart Lane, he has certainly not yet come close to replicating the levels of performance he produced at Roma in 2012/13.

A prominent criticism of Lamela has focused on his tendency to go missing in games and allow the pace of Premier League matches to pass him by, something that was also levelled at Jovetic at City, even if the 25-year-old’s progress in Manchester was primarily halted because of fitness issues.

Balotelli’s lack of movement, meanwhile, was highlighted as an issue in Serie A, so there was always little chance of him thriving in a league that places a larger importance on constant running.

However, stylistic incompatibility isn't the only reason why some Serie A imports have failed to make their mark in the Premier League. Cuadrado, for example, seemed like a natural fit for English football when Chelsea prised him away from Fiorentina in January, with the wideman's game based chiefly on verticality, dynamism and directness.

It's possible, though, that the very characteristics which made Cuadrado a success in Italy worked to his detriment in England.

Italian football has never produced many flying wingers: it is no coincidence that the 3-5-2, a system that doesn't employ wide attackers, is most associated with the game on the peninsula where teams have traditionally been obsessed with dominating the centre of the pitch. Explosive players like Cuadrado aren't readily associated with Serie A and Italy, so it was natural that the Colombian stood out; in the Premier League, where such attributes weren't as rare, he struggled to make an impact.

Trouble in Turin? Why Juve's poor start to the season isn't such a bad thing

The main reason for the contrasting levels of success in England between Zola, Vieira, Henry and Desailly, and Balotelli, Lamela, Jovetic and Cuadrado, however, could simply be the current strength of both Serie A and the Premier League. When the former quartet moved to British shores, they were taking a step down from the world’s strongest domestic division to one that was only just beginning to take its place at the top table. Since then, the Premier League has overtaken Serie A in the pantheon and, for all of its faults, the quality of player in England’s top league is generally higher than in Italy in 2015.

Thirteen players in total completed the switch from Serie A to the Premier League this summer, with Emanuele Giaccherini and Mohamed Salah joining Balotelli, Cuadrado and Jovetic in returning to Italy. For what it's worth, Salah has looked sharp for Roma in his first two matches of the season, while Jovetic has already netted three times for Inter.

It will be interesting to see whether Leicester’s Gokhan Inler, West Ham’s Pedro Obiang and Watford’s Jose Holebas can excel in the division where many of their fellow Serie A alumni have failed to do so.