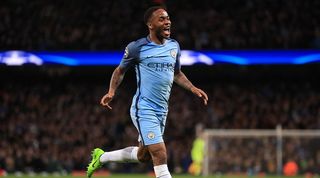 A baby face and the occasional childish sulk often disguise the fact that Walcott is now the Gunners' longest-serving player, having clocked up 11 years at the Emirates. Now 28, the winger was put out after being excluded from Gareth Southgate's latest England squad, pointing out: “I'm one of the leading goalscorers in the league”.

They may not be quite true, but 10 goals and two assists in 23 appearances this season – and a better minute-per-goal ratio than Jermain Defoe and Jamie Vardy – suggests he may have a point. Walcott now has 19 in all competitions and is set for his most prolific Arsenal season, with the 21 he scored in 2012/13 within his sights.

When the Cherries were promoted to the top flight in 2015, they brought King up from the Championship with them, signing the Norwegian from Blackburn Rovers. The 25-year-old was solid enough last term but has suddenly found his scoring touch in 2016/17: he leads the charts for Bournemouth with 12 league strikes, despite rarely playing as an out-and-out striker.

Keane has been a mainstay for the Clarets since joining from Manchester United in January 2015, having already made over 100 appearances for the club.

The centre-back has kicked on a few levels after helping Sean Dyche's side to promotion last year, playing a key role in the eight clean sheets they've recorded this season. He's also earned his first two England caps in the process, becoming the first Burnley player to start a match for the Three Lions since 1974.

Many thought Antonio Conte would immediately introduce a three-at-the-back formation upon taking charge at Stamford Bridge, but the problem area seemed to be at right wing-back.

Step forward Moses, who could have been forgiven for thinking his Chelsea career was over after spending the previous three years out on loan. Since switching to the wing-back system in September, the 26-year-old has started all but two of the Blues' matches - and both of those absences were injury-enforced.

After promising so much as a teenager, a high-profile move to Manchester United in January 2013 halted Zaha's progress. Now back at the club which provided him the platform to earn that transfer to Old Trafford, the 24-year-old finally looks to be realising his vast potential with six goals and seven assists in the league this term. In his previous 79 top-flight appearances, he'd managed only six goals and four assists.

One of the few positives for Aston Villa during a truly dreadful campaign in 2015/16, Gueye has taken another huge step forward since arriving at Goodison Park.

No player has made more tackles in the top flight this term, with the midfielder's performances earning comparisons with Chelsea's N'Golo Kante.

Like Michael Keane at Burnley, Maguire is another young centre-back on Gareth Southgate's radar after impressing for a relegation-threatened team.

Signed from Sheffield United in the summer of 2014, the 24-year-old initially struggled in the Premier League and was sent out on loan to Wigan; after 18 months honing his skills in the Championship, Maguire now plays like a top-flight defender and has been a mainstay during Hull's upturn under Marco Silva.

Leicester's unprecedented title victory in 2015/16 didn't signal success for absolutely everyone at the club. One player who missed out was French defender Benalouane, signed from Atalanta the previous summer but sent back to Italy on loan after taking part in just four Premier League games.

The 30-year-old probably thought that that was it for him at the King Power Stadium, but he's recently been recalled to the first team by Craig Shakespeare and has started the Foxes' last three league games. The end result: three wins and two clean sheets.

With 49 goals in 153 games for Hoffenheim, the Reds splashed out £29m on Firmino in the summer of 2015. Brendan Rodgers always seemed unsure as to where to play the Brazilian, but there's been no such problem for Jurgen Klopp, who's made the 25-year-old the focal point of a fluid three-man attack.

A return of nine Premier League goals and five assists this term has moved Firmino ahead of Daniel Sturridge in the pecking order.

Sterling has received plenty of criticism since moving to Manchester City in 2015. Partly due to his fluctuating form and partly to a £49 million transfer fee that wasn't really his fault. However he's flourished under Pep Guardiola this year, improving his end product to deliver six league goals and six assists. At 22, he's still got plenty of time to become even better.

When Jose Mourinho arrived at Old Trafford at the start of 2016/17, he quickly deemed Bastian Schweinsteiger and Morgan Schneiderlin surplus to requirements. But with Paul Pogba marauding forward, someone had to fulfil the role of midfield safety net.

Previously thought of as an attacking player, Herrera has excelled as an all-action enforcer, earning his first Spain caps as a result of his fine displays.

Always in his twin brother Rafael's shadow at Manchester United, the full-back departed for Cardiff in January 2014 and spent the next two years in the Championship following their relegation.

Yet Boro decided to give Fabio another chance in the Premier League, and the 26-year-old has become a key part of a defence which has conceded fewer goals than all but Chelsea, Tottenham, Manchester City, Arsenal, Manchester United and Everton. Signed for just £2 million last summer, he's proved to be a fantastic bargain.

Southampton are used to selling several of their best players each summer, but they always manage to bounce back with sound recruitment of their own. Redmond was a typically astute acquisition last summer; the 23-year-old had already shown his potential in the Premier League with Norwich, but he's taken his game to another level this year, scoring six goals and winning his first England cap.

Matching high expectations at Liverpool (which weren't helped by being dubbed the “Welsh Xavi” by Brendan Rodgers) sometimes proved a struggle for the popular Allen, who was moved on by Jurgen Klopp last summer. He's excelled at Stoke, though, scoring six times in 30 appearances and providing creativity from a number of different midfield roles.

There haven’t been many positives for Black Cats fans this season, but Pickford has certainly done enough to suggest he'll be playing in the Premier League next season - even if his current employers surely won't be.

The Sunderland academy graduate had managed just three appearances before thie season, but he's now the undisputed No.1 and has impressed despite operating behind one of the division's leakiest defences.

Once rated as one of the best box-to-box midfielders in the Erevidisie, Fer had become better known in England for getting relegated, achieving the feat in successive seasons with Norwich and then QPR.

It may still be third time unlucky for the Dutchman, but his six league goals since Paul Clement took charge have at least given the Swans a chance of survival.

Most of Spurs' best performers of 2016/17 were also in fine form last time out as the north Londoners had a strong season, with Toby Alderweireld, Dele Alli, Harry Kane and Danny Rose all named in the PFA Team of the Year.

Yet one player who's made a clear step forward in the last 12 months is Winks, a product of the club's youth system who's made 33 senior appearances in all competitions this campaign. His superb showings in midfield had already led to calls for the 21-year-old to be rewarded with a first England cap, before an untimely injury ended his season prematurely.

Cleverley's name was often followed by exasperated sighs whenever he was included in an England squad, but there's a reason why managers from Sir Alex Ferguson to Roy Hodgson have rated him so highly.

The midfielder is now proving his worth at Watford, who he joined on loan from Everton in January. He’s played 10 league games since, helping the Hornets to four wins, 15 points and an impressive victory at Arsenal during that time. Watford have duly turned the loan deal into a permanent one.

Iconic shirts: who is Manchester United's greatest ever No.10?

How Brazil rediscovered their mojo, via Coutinho, Tite and some unlikely helpers

West Brom dipped into the Championship to bring Phillips to The Hawthorns last summer - and what a decision it has turned out to be. The winger has shown that he can cut it at this level; only Kevin De Bruyne, Gylfi Sigurdsson, Christian Eriksen and Alexis Sanchez have more assists that Phillips' eight in the Premier League this campaign.

Given that West Ham finished seventh last year but are in danger of being dragged into a relegation dogfight this time around, most of their players have taken a step back rather than forwards. Lanzini has tried his best to fill the void left by Dimitri Payet in January, though, and seven league goals indicate that the Argentinian is doing a pretty good job.