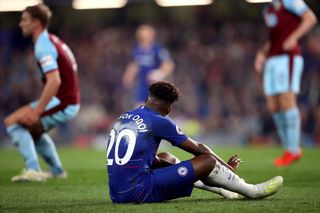 Chelsea winger Callum Hudson-Odoi is facing a spell on the sidelines after rupturing his Achilles tendon during Monday night’s 2-2 Premier League draw with Burnley.

Here, Press Association Sport takes a look at five players who have suffered similar injuries and how they have fared afterwards.

England midfielder Beckham missed the 2010 World Cup in South Africa after tearing his Achilles while playing for AC Milan on loan from LA Galaxy. The then 34-year-old made a full recovery and played for another three years before ending his illustrious playing career at Paris St Germain in 2013.

Arsenal defender Koscielny might have had a World Cup winners’ medal among his collection had it not been for the ruptured Achilles he suffered in last season’s Europa League semi-final against Atletico Madrid. The France international spent seven months on the sidelines, but returned to action in December last year and has since re-established himself in the Gunners’ starting line-up.

Republic of Ireland international Walters called time on his career in March after finally admitting defeat in his efforts to bounce back from a partially-ruptured Achilles tendon. The 35-year-old Burnley striker picked up the injury after coming on as a substitute at Bolton in September last year during a loan spell at Ipswich, and was initially expected to be sidelined for six months.

Liverpool and England winger Barnes suffered a second Achilles rupture on England duty in Finland in June 1992 and missed both the FA Cup final and the European Championship as a result. Surgery left him with a sizeable scar and on his return some five months later, the blistering pace which had helped to make his name had gone.

England midfielder Webb was floored by a snapped Achilles just weeks into his Manchester United career after making a £1.5million switch from Nottingham Forest in 1989. He spent seven months on the sidelines, but struggled to return to his best during his three years or so at Old Trafford and on his return to Forest before dropping down the divisions.