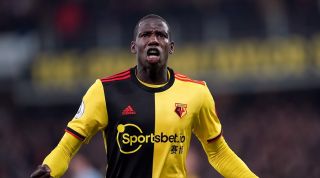 Watford midfielder Abdoulaye Doucoure has admitted that he could "easily" leave Vicarage Road this season.

Doucoure has been a key player for the Hornets since being moved into a more advanced midfield role by Nigel Pearson.

The Frenchman has scored three goals and provided one assist in his last six Premier League outings, sparking rumours that Manchester United and PSG could make a move for him this summer.

And Doucoure had admitted that he is open to offers from bigger clubs, while he appeared to hint at a preference for United by declaring that he is happy with life in England.

"If a big club manages to make an interesting offer for me, of course the club will let me leave, easily," he told Canal+.

"A club that plays in the Champions League is the goal, but I don’t have a particular one in mind.

"We’re little by little arriving at the end of the cycle. Maybe the club [Watford] has certain expectations for me, I don’t really know them yet, but I can still progress and still do good things, so if I were to change clubs, it would be to go up a level.

Doucoure also has international ambitions, having represented France at under-17, under-18, under-19, under-20 and under-21 level.

The midfielder is uncapped on the senior stage, though, but he still hopes to play for Les Bleus desptie also being eligible for Mali.

“To play for France is still a dream, it is something that I will fight for as long as possible. I think I am of an age where I still have time. My decision is not final. "Of course I am targeting France but Mali has never approached me. We will see in the years to come."