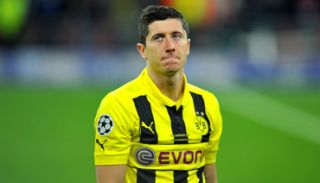 However, Cezary Kucharski told Polish local news channel TVN24 that Bayern had yet to agree terms for Dortmund's top scorer.

"For us it is clear, but we have not signed anything," Kucharski said. "The clubs need to reach an agreement."

Kucharski gave no further details, but said they should emerge within three weeks' time.

The newly crowned German champions have already signed 20-year-old Mario Gotze from Dortmund for next season for 37 million euros.