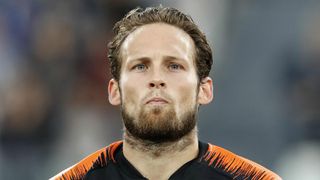 Ajax coach Erik Ten Hag says the Dutch club is "doing everything" to try and sign Manchester United's Daley Blind, citing the defender's versatility as a potential asset to his squad.

Blind moved to Old Trafford from Ajax in September 2014 and enjoyed three seasons as a regular first-team player before finding his opportunities in Jose Mourinho's side limited in 2017-18.

Ten Hag was quoted by Sky Sports News claiming he was confident of adding either Blind or Boca Juniors defender Lisandro Magallan to his options for the new season.

Describing Blind, Ten Hag said: "[He is] a player with a lot of experience, in the Premier League and in the Dutch national team.

"He can handle both positions well, both as a central defender and as a controlling midfielder.

"We are doing everything, but it also depends on other parties."

Mourinho said at the end of 2017-18 that he had no plans to sell Blind but Ten Hag indicated that if he fails to secure Magallan's signature then Blind will be his focus.

"He is still in the picture, but whether he actually arrives is still unclear," Ten Hag said of Magallan.

"It will be either one of Magallan or Blind. Both of them do not seem realistic."