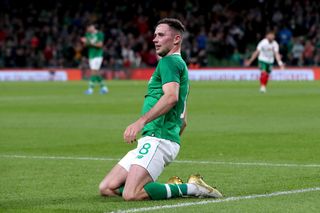 Alan Browne is on red alert for the Republic of Ireland’s crucial Euro 2020 qualifying showdowns with Georgia and Switzerland after reminding manager Mick McCarthy of his worth.

The 24-year-old Preston midfielder marked a rare start for his country with the opening goal – his first in the green jersey – in a 3-1 friendly victory over Bulgaria on Tuesday evening to confirm his return to contention after a series of niggling injuries.

Browne has made only one appearance to date in the Group D campaign, a cameo as a second-half substitute in Thursday night’s 1-1 draw with the Swiss in Dublin, but is ready to play his part if called upon in either Tbilisi or Geneva next month as qualification reaches crunch point.

He said: “I think I’ve given my all on the pitch and that’s all anyone can ever do. I don’t think I’ll be going straight into the team or anything, I don’t expect that.

“The boys have done fantastically in the campaign so far and they deserve their spots in the team.

“But people get injured or suspended, you’ve got to be ready to go. Hopefully I’ve put a doubt in his (McCarthy’s) mind and we’ll see where I go from here.”

Nine men have started each of the five qualifiers to date while 10 more have been involved in home and away wins over Gibraltar, victory over Georgia in Dublin and draws with Denmark and the Swiss.

McCarthy is unlikely to make radical changes in October although he will have to make at least one against the Georgians with first-choice left-back Enda Stevens suspended.

Ireland will travel boosted by the Danes’ goalless draw in Tbilisi, but aware that life will be just as difficult for them at the Boris Paichadze Stadium.

Nevertheless, excitement is mounting within the squad as they target a third-successive trip to the European finals.

Browne said: “We know we’ve got to go over there and get results in both games – that’s what we hope to do.

“In the Switzerland game, we had to show good reserve, got the equaliser and it was a massive point for us.

“Going to the likes of Georgia and Switzerland, they’re going to up their performances.

“We’re coming together well as a team now and I think the performances follow, so hopefully we can improve and get even better results.”

The Republic remain unbeaten in the six games since McCarthy returned to the helm, although their victory over the Bulgarians was achieved with a team comprised largely of understudies with debutants Josh Cullen, Jack Byrne and James Collins in particular catching the eye.

Browne opened the scoring 10 minutes into the second half and – although substitute Ivelin Popov levelled from the spot – late strikes from central defender Kevin Long and Collins completed the job.

Browne said: “With all the changes the gaffer made, we knew we had to not just put on a performance, but win the game.

“Winning is a habit – one win can take you a long way – so keeping the results going without losing is fantastic.”