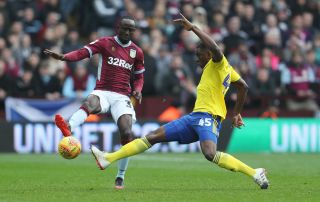 Adomah, 31, was released by Aston Villa at the end of last season following their promotion to the Premier League.

“Nottingham Forest are delighted to announce the signing of winger Albert Adomah,” Forest announced on their official website.

“The 31-year-old has signed a two-year contract with the club and joins Sabri Lamouchi’s squad ahead of the pre-season trip to Greece later this week.”

Adomah made 42 appearances in all competitions for Villa last season, making his last appearance in their Sky Bet Championship play-off final win against Derby.

The Ghana international began his Football League career at Barnet and had spells at Bristol City and Middlesbrough before joining Villa for an undisclosed fee in August 2016.

He is Forest’s fifth signing in the last week under new manager Lamouchi, who was appointed last month after Martin O’Neill’s departure.