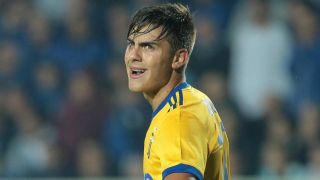 The Argentina international appeared unhappy at being substituted in the 6-2 win over Udinese last weekend and was filmed by TV cameras apparently muttering an insult towards Allegri while on the bench.

The incident came after the Juve head coach suggested the 23-year-old was "a little disconnected" after his side's 2-1 Champions League win over Sporting CP.

Dybala started the season in spectacular form but has now failed to score in four of his last five Serie A appearances, while he also missed penalties in the draw with Atalanta and the 2-1 home defeat to Lazio.

Allegri expects him to recapture his best soon, though, and insists there is no ongoing problem between them.

"There is no problem," he told a news conference. "At that moment [against Udinese] I needed a player who could counter-attack and substitutions are part of the decisions a coach has to make.

"These strikers have always scored goals and always will. Everyone has a moment where they don't find the net for three or four games. The important thing is to keep doing the usual performances."

"I can confirm Gigi Buffon and Giorgio Chiellini will not play," he said. "Claudio Marchisio is ready for a run-out, not the whole game. I've called up Mattia De Sciglio but he is lacking match sharpness.

"Gonzalo Higuain, Paulo Dybala and Douglas Costa will play, as will Alex Sandro.

"This game is worth three points, just like last weekend and the next. We must have great respect for SPAL. They play attractive, attacking football and they've had some narrow defeats, causing their opponents big problems.

"We must get back to winning on home soil."