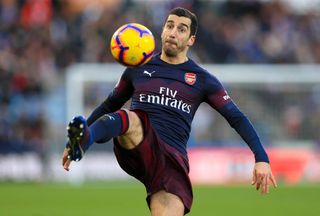 Arsenal are liaising with the Foreign Office after it emerged season-ticket holders with dual British and Armenian citizenship have been denied visas to travel to Baku for the Europa League final.

The Gunners face Premier League rivals Chelsea in the Azerbaijani capital on May 29 – but the decision to host the fixture in Baku’s Olympic Stadium has thrown up plenty of issues since the two London clubs qualified last week.

Hostility remains between neighbouring countries Armenia and Azerbaijan over the disputed Nagorno Karabakh region, where a ceasefire was declared in 1994 after fighting erupted several years earlier.

Arsenal’s Henrikh Mkhitaryan, captain of the Armenia national team, missed the Europa League group game against Qarabag in Baku earlier this season because of the issue.

Now some supporters face the same issue, with several British-Armenian season-ticket holders not being granted entry into Azerbaijan.

Press Association Sport understands Arsenal are now in talks with the Foreign Office in an attempt to ease the situation.

Arsenal and Chelsea have already declared their disappointment at the ticket allocation for the final, with both clubs receiving in the region of 6,000 tickets each for a stadium which has a full capacity of 69,870.

Travel to Baku, which lies further east than Baghdad and Riyadh, is also proving an issue for those fans who have qualified for a match ticket.

Only seven miles separates the London teams’ stadiums, but their fans must embark on a 2,500-mile trip to attend the game.

An Arsenal statement on that issue read: “We are bitterly disappointed by the fact that due to transport limitations UEFA can only make a maximum of 6,000 tickets available to Arsenal for a stadium with a capacity of well over 60,000. Time will tell if it is even possible for 6,000 Arsenal fans to attend the match, given how extreme the travel challenges are.

“We have 45,000 season ticket holders and for so many fans to miss out due to UEFA selecting a final venue with such limited transport provision is quite simply not right. The reality is that whoever reached the final would not be able to meet demand from their supporters.

“We would like to understand the criteria by which venues are selected for finals, and also how supporter requirements are taken into account as part of this. Moving forward we would urge UEFA to ensure that supporter logistics and requirements are a key part of any future decisions for final venues as what has happened this season is unacceptable and cannot be repeated.”

There are only three scheduled flights per week between London and Baku, but all seats are sold out in the days before and after the match – other non-direct flights can take over 10 hours.

Driving the distance would take upwards of 50 hours behind the wheel, while a train journey could last as long as four days.