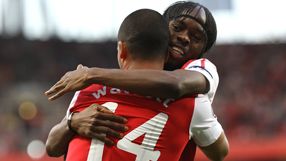 Koscielny has an ankle injury, Walcott a knee problem and Gervinho a mild muscle strain although all three could be fit for Sunday's Premier League match against Tottenham Hotspur.

Arsenal drew their opening Champions League Group F match against Borussia Dortmund 1-1 and lie 13th in the Premier League after a disappointing start to the season.

The North London club's problems have been compounded by the loss of England midfielder Jack Wilshire, who will be sidelined for between four to five months after surgery to repair a stress fracture to his right ankle.

Wilshire has not played a competitive match this season after sustaining the injury in a pre-season friendly against the New York Bulls at Emirates Stadium.

Wenger bolstered his midfield during the off-season, bringing in Mikel Arteta and Yossi Benayoun to add experience.

"[Wilshere's injury] makes us a bit shorter in midfield and it puts a bit more pressure on our midfielders to perform game-in, game-out, because we will have less rotation possibilities," he was quoted as saying on the Arsenal website.

"But every club can be tested on that front so it shouldn't impact our end result of the season and shouldn't be any excuse at all.

"Jack can come back and be very strong and help us finish the season well.

"If Abou Diaby comes back well and quickly we should, number-wise and quality-wise, be all right. That depends as well on the injuries we have in the next two or three months."