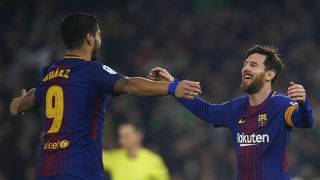 Barcelona will take on Valencia in the semi-finals of the Copa del Rey, with Real Madrid's conquerors Leganes facing Sevilla.

Ernesto Valverde's men boast an 11-point lead at the top of LaLiga and stayed on course for a domestic double with a 2-0 victory against neighbours Espanyol on Thursday, with first-half goals from Luis Suarez and Lionel Messi at Camp Nou overturning a 1-0 deficit from the opening leg.

The story of the quarter-finals came a day earlier, with Madrid unable to make a 1-0 advantage from the initial game stick against Leganes.

Javier Eraso and Gabriel Pires scored either side of a Karim Benzema goal to hand Asier Garitano's men a famous away-goals triumph.

Valencia won 2-1 in each leg against Alaves to earn the dubious reward of dual showdown with Barca, while Sevilla saw-off Atletico Madrid 5-2 on aggregate.

Sergio Escudero netted inside the first minute on Tuesday, with Pablo Sarabia completing a 3-1 win at the Ramon Sanchez Pizjuain after Ever Benega converted a penalty early in the second half.