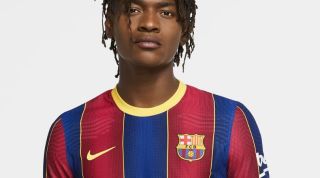 Barcelona have revealed their new home kit for the 2020/21 season with a design inspired by their ‘Golden Era’ of the 1920s.

The club’s traditional blue and red vertical stripes return, and are complemented by a round yellow collar and yellow pinstripes.

Barca claim that the idea for the new kit came from ‘the club’s first Golden Era’ in the 1920s.

During that decade, they won the Spanish Championship, now the Copa del Rey, in 1928 before becoming the first winners of the Spanish Liga a year later.

Sales of the top begin today, Tuesday July 14, and you can order yours from the Nike website here.

The club announced that the pricier match-quality kits will be available online at the Barca Store, as well as in shops around the city, but due to ‘a technical issue’ the standard stadium kit isn’t available yet.

This season’s home top featured a chequered pattern, but Nike have returned to the traditional stripes for the new campaign.

To complete the kit, there are blue shorts with a vertical maroon stripe, and horizontally striped socks that imitate the shirt design.