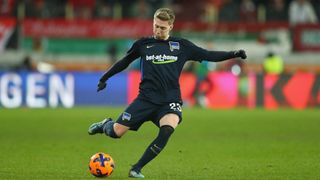 Bayer Leverkusen have announced the signing of Mitchell Weiser from Hertha Berlin on a five-year contract.

The former Germany Under-21 right-back has excelled at Hertha since joining on a free from Bayern Munich in 2015 and will now link up with Leverkusen as they prepare to return to European competition.

The club are all but guaranteed a Europa League place, yet could still qualify for the Champions League, with sporting director Rudi Voller noting the need for transfer activity to boost the squad.

"This is absolutely necessary in light of the fact that we have qualified for Europe for the coming season," Voller said.

"In order to handle the additional burden of international competition, as well as the Bundesliga and DFB-Pokal, and to continue to be successful, equal and high-class alternatives are required in all positions.

BREAKING NEWSMitchell is transferring to Leverkusen!Welcome to the squad, ! May 8, 2018

"That's what we're working on, and Mitchell is a very important piece. He has proven in recent years what a great talent he is.

"But we also see that he has not reached his full potential. Mitchell has all the prerequisites to become an absolute top player with Bayer in the years to come."

Weiser, who is the son of Leverkusen youth coach Patrick, scored the lone goal in Germany's 1-0 win over Spain in last year's European Under-21 Championship final.