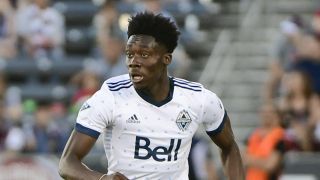 Bayern Munich have agreed a deal with Vancouver Whitecaps and MLS to sign teenage forward Alphonso Davies in January.

Davies has impressed for the Whitecaps since making his debut in 2016, making 55 first-team appearances and scoring three times in the league.

The 17-year-old's progression in MLS has earned him six international caps with Canada and attracted the attention of Europe's top clubs.

Bayern have won the race for his signature, though, signing a contract until 2023 with the Bundesliga champions.

"At the age of 17, he offers a lot of promise for the future. Alphonso already possesses great ability, which is why a lot of top clubs were keen on him.

"I'm delighted he's chosen Bayern. I want to thank everyone who worked on this transfer, especially our scouting and legal departments. It was outstanding teamwork."

are delighted to announce the signing of !He’s joined the club on a contract running until 2023 July 25, 2018

Davies is relishing the chance to play in Europe and cannot wait to move to Germany in January.

He said: "I'm very happy about my transfer to Bayern. As a kid I always dreamed about this moment and now the dream has come true.

"But now the hard work continues, I have to give everything to make the most of this opportunity."