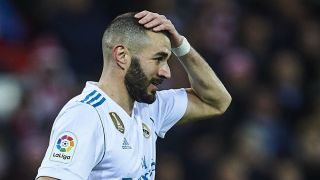 Karim Benzema described Aurelio De Laurentiis as "crazy" after the Napoli president said the Real Madrid striker was too old to be a transfer target.

Benzema had been linked with signing for Napoli to reunite with former Madrid coach Carlo Ancelotti, with whom he won the 2013-14 Champions League.

But the possibility of Benzema joining Napoli is "not remote, it's very remote" according to De Laurentiis, with the French striker unimpressed by this assessment.

"Another crazy joins the list," wrote 30-year-old Benzema on his Instagram story, alongside a media report of De Laurentiis' comments.

De Laurentiis added that Cavani would have to "cut his salary in half" to rejoin Napoli, who he left for PSG in 2013.

The Napoli president suggested earlier this month Juventus' new signing Cristiano Ronaldo, 33, was offered to the club before joining the Serie A champions in a €112million switch from Madrid.