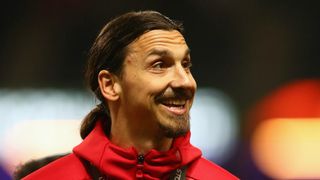 There is no shortage of star attractions among the free agents list, with Zlatan Ibrahimovic, Pepe and John Terry among the household names available as of July 1.

Clubs will be jostling for the signatures of these three big-name stars who can be secured without a fee, as well as a raft of others who are now unattached.

With teams across Europe starting to get their pre-season campaigns under way, managers will be keen to add to their squads ahead of the big kick-off.

Here, we look at six of the best free transfers available on the market right now:

Undoubtedly the most famous player to be without a club, Ibrahimovic is receiving treatment for a serious knee injury sustained towards the end of 2016-17. After scoring 17 Premier League goals last season, Manchester United may have been keen to keep the Swede at Old Trafford before his injury, but he turns 36 in October and faces a long road to recovery. Atletico Madrid - who cannot sign anyone until their transfer ban expires in January - is a possible destination.

It is extremely difficult to imagine Terry in anything other than a full Chelsea kit, but Birmingham City have reportedly offered the former England captain a chance to stay in blue. Midlands rivals Aston Villa are also among the front-runners for his signature. The 36-year-old barely kicked a ball for Antonio Conte's champions last season, but a Premier League move remains on the cards with West Brom and Bournemouth thought to be interested.

Another veteran centre-back who could be topping a few shopping lists this season is lovable rogue Pepe, who has left Real Madrid after 10 years at the club. He is still playing for Portugal at the age of 34, although a broken rib meant he could not play in the Champions League final and go out on a high. Paris Saint-Germain are said to want to add Pepe to their defensive options as Unai Emery tries to regain the Ligue 1 title from Monaco.

Pepe's former Madrid team-mate is also seeking a new club, having left Porto after a slightly disappointing couple of seasons. The 36-year-old has lost his place in the Spain team but he is still being linked with some of the biggest teams in Europe, with betting even having been suspended on Casillas joining Liverpool last month.

One of a clutch of players released by Pep Guardiola, speedy winger Jesus Navas may have frustrated Manchester City fans with his lack of end product, but his versatility could be appealing to coaches across Europe. Sevilla president Jose Castro wants to bring the Spaniard back to the LaLiga club and that move would seem to make sense for all parties.

While Torres is keen to sign fresh terms at Atletico, the club's apparent reluctance to offer the former Liverpool striker a contract could see him soon on the market as a free agent. Atletico's transfer ban means a new Torres deal feels like a no-brainer and should they fail to give the 33-year-old another year, plenty of teams will surely step in.