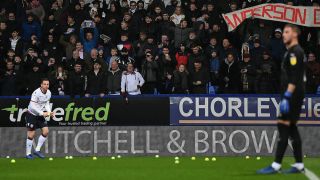 West Brom moved up to third in the Championship table as they deepened the gloom at Bolton Wanderers with a 2-0 victory over their relegation-threatened hosts on Monday.

Jay Rodriguez's 14th goal of the season put Darren Moore's side ahead before substitute Sam Field's poked finish with 15 minutes remaining made sure of the three points, carrying them above Sheffield United in the standings.

Kick-off was delayed in the fixture after disgruntled Bolton fans threw tennis balls onto the pitch as part of their protests against the club's owner, Ken Anderson, having already held a demonstration outside the ground earlier.

Once the objects were removed from the playing surface – with some home players helping the clean-up operation – Bolton had the first chance of the game, Gary O’Neill's glancing header narrowly drifting wide of the target.

However, West Brom went ahead in the 19th minute, Craig Dawson’s looping header from Chris Brunt’s free-kick allowing Rodriguez to nod in close to the line.

Bolton offered a greater attacking threat in the second half, Jason Lowe working visiting goalkeeper Sam Johnstone with a close-range effort, but were caught out at the back when Dwight Gayle's clever dummy set Field in the clear.

The midfielder – on as a first-half substitute to replace the injured Brunt - stabbed the ball beyond the advancing Ben Alnwick to put the game beyond Bolton, who remain in 23rd place.