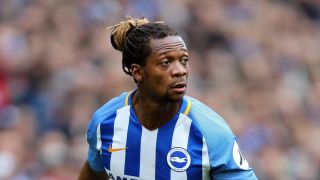 Rodriguez was charged by the FA with using "abusive and/or insulting words which included a reference to ethnic origin and/or colour and/or race" towards Brighton and Hove Albion defender Bong after the pair clashed during a Premier League match in January.

Bong made a complaint against the West Brom player after he appeared to squeeze his nose and waft a hand at him and, although Rodriguez denied making a comment that referred to his opponent's skin colour, he conceded he made a remark relating to his breath.

The commission ruled the accusation made against the England international by Bong could not be proven, although the FA stressed it was not a "malicious or fabricated complaint".

The Cameroonian maintains his stance and said the commission's verdict should not dissuade future victims from coming forward.

"I am very disappointed because the lack of evidence has not led to sanctions against such attitudes," Bong said in a statement posted on Twitter.

"But in spite of my disappointment, I encourage everyone, men and women, who may also be subjected to a similar experience, to stand up and denounce such acts, even if the chances of obtaining sanctions are likely to be very small.

"Despite the lack of evidence, I am certain of what I heard on the field. Human rights are universal rights that are not foreign to any culture, and they belong to all countries."

Mr Rodriguez has apologized and this his is already a step in the right direction !! April 13, 2018

Bong, however, indicated he is ready to move on from the incident, adding: "Mr Rodriguez has apologised and this is already positive."

A representative for Rodriguez noted the West Brom forward's apology should not be considered an acceptance of guilt.

"The case against Jay Rodriguez was dismissed by an independent FA commission and he was cleared of making any racist remarks," a statement retweeted by Rodriguez said.

"At the hearing Jay apologised to Mr Bong for any offence caused by the gesture he made during the game - this was accepted by Mr Bong. It is important to clarify that Jay did not apologise for making any racist comments as Jay never said anything racist.

"It is important that all parties respect the decision of the FA commission and move on."