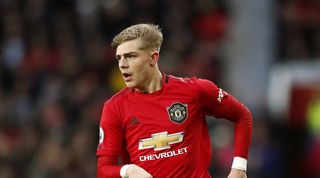 Patrice Evra has claimed that he convinced Ole Gunnar Solskjaer to give Brandon Williams a chance in Manchester United's first team.

The 19-year-old left-back made his Premier League debut in October, and has since made nine more appearances in the top flight.

The Frenchman is currently working on his coaching badges and has been based at United for part of his course.

And Evra has now revealed that he played a big part in Williams joining up with the senior squad.

"I'm doing my coaching badges at Manchester United, I go like two weeks per month to do my course, and someone sent me a video about Brandon," he told Copa90.

"I was watching it and was like 'Wow, he has got something I really love'. So, I saw him, and he was tough, and after the training session I went with the first-team and I saw Ole.

"I said, 'Ole, do you know about that kid Brandon Williams?'

A 2-0 victory over Chelsea on Monday moved Solskjaer's side to within three points of the top four as they attempt to seal a return to the Champions League.

United host Watford on Sunday, looking to avenge the 2-0 defeat they suffered at Vicarage Road in December.

The Red Devils then face Club Brugge in the second leg of their Europa League last-32 tie on Thursday, following a 1-1 draw in the first leg in Belgium this week.

United also remain in the FA Cup, where they will lock horns with Derby in the fifth round in early March.