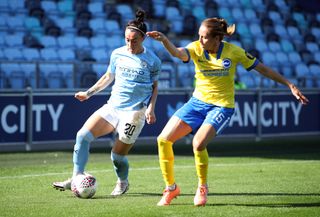 Lucy Bronze and Alex Greenwood were denied a winning debut for Manchester City as Brighton held them to shock 0-0 draw in the Women’s Super League.

Bronze is back at City for a second time and Greenwood, like Bronze, has moved from Lyon, but there would be no winning start.

City created the majority of the chances in the game, however all were stifled by a well organised Brighton defence and some excellent saves by goalkeeper Megan Walsh.

Brighton, who only gained one point away from home in all of last season, had to battle to the final whistle to keep the star-studded Man City side out but managed to make their point.