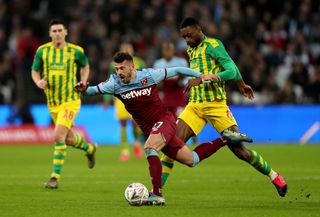 Celtic have completed the signing of Switzerland striker Albian Ajeti from West Ham on a four-year contract.

The 23-year-old former Basel player joins for an undisclosed fee which is reported to be £5million.

Ajeti joined the Hammers a year ago but his three starts all came in cup competitions and he failed to score in 12 appearances. He was top goalscorer in the Swiss league in the 2017-18 season and played alongside Celtic winger Mohamed Elyounoussi.

Manager Neil Lennon said: “We are delighted to bring Albian to Celtic. He is a tremendous player, an international with real quality and I know he is really determined to do all he can to bring more success to our supporters.

“I have admired him for long time as he is a really intelligent footballer, well balanced and a really good finisher. We are so pleased to make him a Celtic player and we hope he has a long and prosperous career with us.”

Ajeti revealed both Lennon and Elyounoussi had lobbied him to make the move but he needed little persuasion.

“I played with Moi Elyounoussi back in the day at Basel,” he said on the Celtic website.

“He’s a good boy and I’m really happy that we get the chance to play together again. He called me and text me a couple of times, he knew my situation and he knows me as a player. He tried to convince me to come here, but it wasn’t needed!

“On the pitch, I hope that he can assist me some goals. We played very well together during our time in Basel, we were successful together, he assisted me, I assisted him, and I’m really looking forward to playing with him again.”

He added: “The manager’s encouragement was also a big part of me coming here. As a football player, especially as a striker, you need confidence. I was happy that the gaffer called me, he made it easier for me to come and sign for Celtic.”