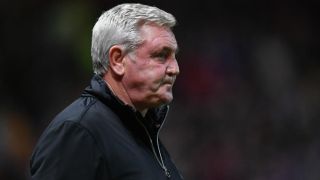 Glenn Whelan missed a late penalty as Aston Villa shared the points in a remarkable 3-3 draw with Preston North End in the Championship, piling the pressure on Steve Bruce.

Meanwhile, Marcelo Bielsa's Leeds United returned to the top of the table with a 1-0 victory at Hull City - Tyler Roberts' superb goal proving the difference at the KCOM Stadium.

Leeds are joined on 22 points by Middlesbrough, who saw off Ipswich Town 2-0.

It is a difficult time for Villa boss Bruce, whose side sit 12th after a dismal run of just one win from their last nine Championship matches.

To make matters worse, Bruce was subjected to a fan protest prior to kick-off at Villa Park, where a supporter threw a cabbage towards him.

Bruce will have been feeling better about things by the interval however, with Jonathan Kodjia and Tammy Abraham having put Villa 2-0 up, only for Preston substitutes Daniel Johnson, Paul Gallagher and Louis Moult to turn the game on its head in the second half.

Villa - who also had James Chester sent off - threw on Yannick Bolasie to snatch a 91st-minute equaliser, and it looked as though Bruce would have the last laugh when Johnson brought down Birkir Bjarnason but, in a cruel twist, Whelan failed to convert from 12 yards.

BIELSA'S BOYS BACK ON TOP

West Brom's stay at the top was short lived, as Roberts' 51st-minute effort earned Leeds a 1-0 win in a Yorkshire derby with Hull to put the Whites back in pole position.

The visitors dominated much of proceedings, but it was not all smooth sailing, and both Kamil Grosicki and Tommy Elphick passed up good opportunities for the hosts in the first half.

Barry Douglas should have done better on the stroke of half-time, but Roberts made sure his team-mates' profligacy did not come back to bite Leeds when he rattled home the winner from 25 yards.

TABLE: Wins on the road for and take them above , who play tomorrow.'s point at Villa Park closes the gap at the foot of the Sky Bet Championship table. October 2, 2018

MIDDLESBROUGH KEEP UP THE PACE

Leeds are being kept on their toes by Boro, who cruised into second place thanks to goals from Muhamed Besic and Stewart Downing at Portman Road.

Besic's first of the season came in style, the Everton loanee charging from deep before slotting coolly past Dean Gerken after capitalising on a lucky deflection.

Downing followed the opener up with a typically composed left-footed finish four minutes later, and despite Jordan Hugill missing a glut of chances after the restart, Boro were never in danger of squandering their lead.

IN-FORM INCE GETS STOKE BACK ON TRACK

Thomas Ince scored for the third Championship game running as Stoke ended a three-match winless run with a 2-0 victory over Bolton.

Ince netted Stoke's first goal in the 2-2 comeback draw with Rotherham last time out, and the former Huddersfield Town forward was on hand to wrap up the points on Tuesday, with Bruno Martins Indi having put the hosts ahead inside 10 minutes.

Stoke are now up to 16th, seven points clear of the relegation zone, and just four shy of the play-off places.