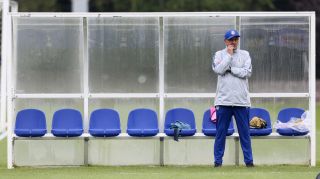 Injured duo Antonio Rudiger and Callum Hudson-Odoi were the only notable absentees as Chelsea trained ahead of Thursday’s Europa League semi-final first leg at Eintracht Frankfurt.

Blues manager Maurizio Sarri put his players through their paces at the club’s Cobham training ground on Wednesday morning, with the squad scheduled to travel to Germany later in the day.

Defender Rudiger was on Tuesday ruled out for the rest of the season having undergone knee surgery, with Andreas Christensen likely to take his place at Commerzbank-Arena.

England winger Hudson-Odoi was already unavailable to Sarri for the remainder of the campaign after rupturing his Achilles against Burnley on April 22.

Meanwhile, Brazil forward Willian, who was on the receiving end of a heavy challenge from Manchester United defender Marcos Rojo during Sunday’s 1-1 draw at Old Trafford, took part in the session and showed no ill effects.

Chelsea head to the continent still hoping to secure a place in next season’s Champions League.

The Blues can do so by winning the competition, or holding on to fourth place in the Premier League. They are currently two points ahead of fifth-placed London rivals Arsenal –  who play Valencia in the other Europa League semi-final – with two domestic fixtures remaining.

Europa League top scorer Olivier Giroud also trained freely on Wednesday. The France striker has hit 10 goals in 11 games in the competition this term and is once again set to start ahead of top-flight regular Gonzalo Higuain.

The Blues, who won the tournament in 2013 under Rafael Benitez, host Eintracht in the second leg at Stamford Bridge on May 9.