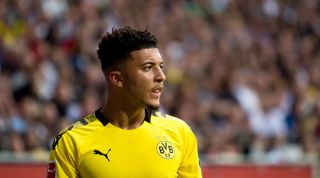 The Premier League giants are set to clash in the summer transfer market as they both make Sancho a priority, according to the Sun.

Sancho has continued his prolific form for Dortmund and his stock is perpetually increasing as a result.

Sancho scored in Dortmund's 5-0 win against Union Berlin on Saturday, becoming the youngest player in Bundesliga history to reach 25 goals.

The 19-year-old has 12 goals already in the league this season and another 13 assists to boot.

Sancho has long been linked with a move to Manchester United who are said to be huge fans of the English youngster.

But Chelsea are believed to be edging into the frame for the former Manchester City player.

The Blues are reported to have made an enquiry in January with a view to sounding out a summer move.

Chelsea didn't make any signings in the winter window, even after having their transfer ban lifted following an appeal to the Court of Arbitration for Sport.

The west London club were linked to Edinson Cavani, but the Uruguayan ended up staying at PSG.

Whilst it may impact their immediate situation, the lack of outlay may mean that Chelsea have more to spend in the summer.

Sancho is thought to be worth more than £100m, so having the cash reserves to pull off such a deal is essential to any club who's serious about doing a deal.

Manchester United's concern won't be money, but rather their ability to attract Sancho to the club.

United are currently out of the Champions League places and six points behind Chelsea, who sit in fourth.

Whilst it's not perceived as essential, being involved in Europe's elite competition is a huge pull for a player of Sancho's reputation.