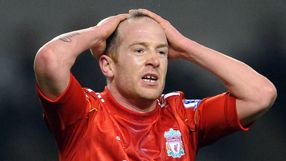 The Scotland midfielder, who has not played since March 21, is also out of contention for a place in the Britain squad for the London 2012 Olympics.

"There is no operation needed but he won't play this season," Dalglish was quoted as saying on Liverpool's website.

"And I would think if they had any designs on having him in the Olympics he wouldn't be fit for that either."