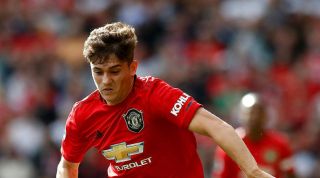 Daniel James says Manchester United do not go into any game "feeling like underdogs" ahead of Sunday's showdown with Liverpool.

Jurgen Klopp's side have won 20 of their 21 Premier League matches this season, with United the only team who have held them to a draw.

Liverpool will move 16 points clear of the chasing pack if they emerge victorious at Anfield, while United are currently five points adrift of the top four.

However, james insists United are not fearful of facing the in-form Premier League leaders on their own patch.

"I don't think we go into any game feeling like underdogs," the former Swansea winger told the Daily Mail.

"It's always been like that and something I learned from day one here. We are United.

"It is going to be tough but we go into it feeling positive. We are the only team to have taken points off them already and we'll go full of high hopes.

"It will be a case of doing what we did last time. We were unlucky to only get a draw with them scoring a late equaliser. We will go there with no fear.

"Last time we played them, we were only a point off the bottom three and under pressure from everywhere. The players must have felt that, even though they handled the game fantastically.

"We are more confident, definitely. It is always the foundation of any team to defend well. We spent the majority of our money in the last transfer window on Aaron Wan-Bissaka and [Harry] Maguire because we needed to defend better but also control and dominate.

"Harry has such an authority and he is confident on the ball. We need to be better on the ball than we were last time against Liverpool. You need courage to play there."