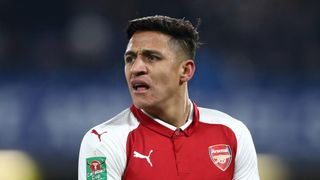 Manchester United and Arsenal are expected to imminently confirm a swap deal that will see Alexis Sanchez and Henrikh Mkhitaryan move between the two clubs.

No cash is thought to be involved in the transfer, with Sanchez in the last six months of his Arsenal contract, while Mkhitaryan is unwanted by United manager Jose Mourinho.

But which club is getting the better end of the deal? With the help of Opta data, we assess the transfer...

Sanchez and Mkhitaryan are not exactly the same sort of player, so perhaps it is unfair to compare their goal returns.

But it is clear Sanchez comes out well on top here. The Chilean has scored 60 Premier League goals in 122 appearances, a ratio of close to a goal every other game.

Mkhitaryan has only scored five Premier League goals for United, although the Armenian is more a playmaker than a finisher.

He scores on average every 456 minutes in the Premier League, compared to every 169 minutes for Sanchez.

MKHITARYAN EDGES AHEAD ON CREATIVITY

Sanchez is slightly behind Mkhitaryan in terms of assists, however. Mkhitaryan provides an average of 0.24 assists per game, compared to 0.22 for Sanchez.

The duo are remarkably similar on touches per game - Mkhitaryan taking 74.61 to Sanchez's 74.46 - but there is an indication the United man may be less selfish.

On average, Mkhitaryan completes 51.47 passes per Premier League match compared to Sanchez's 48.16, while his ball retention is also significantly better.

The Armenian's passing accuracy in the Premier League stands at 83.44 per cent, well clear of Sanchez's 75.86 per cent, so perhaps he will fit Arsene Wenger's philosophy.

Wow, super happy to have received most of the votes in Armenia's top 10 athletes of the year pollFull statementDecember 25, 2017

Sanchez has been a regular scorer for Arsenal and the Opta data shows why he outstrips Mkhitaryan in front of goal.

The Chile international converts 14.08 per cent of his shots, compared to Mkhitaryan's 10.42.

He has far more efforts as well, Sanchez recording an average of 1.44 shots on target a game, while Mkhitaryan takes just 0.83.

Sanchez may therefore provide the ruthless cutting edge in front of goal Mourinho craves, while Mkhitaryan appears to fit well with Arsenal's passing style. In short, both clubs seem to be signing a player who will slot well into their existing system.