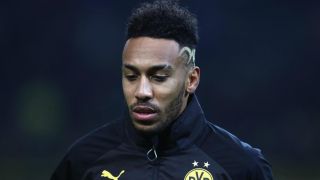 Borussia Dortmund head coach Peter Stoger has not closed the door on Pierre-Emerick Aubameyang returning to the team, despite growing speculation the star forward is set to join Arsenal.

Aubameyang was left out of the squad for Dortmund's 1-1 draw against Hertha Berlin in the Bundesliga on Friday amid links with Arsenal and doubts over his commitment.

The 28-year-old Gabon international has been tipped to replace Manchester United-bound Alexis Sanchez at Arsenal but Stoger said Aubameyang could be back for next week's clash against Freiburg if he regains his focus.

"Well generally it doesn't bother me at all if Aubameyang right now is kicking it around somewhere else. That's his decision. If he had been good the moment we had training, he would have played [Friday] today," Stoger said.

"But I didn't have that impression of him in the last training before the match. I felt like he was busy with many things but not this important match. That's why he wasn't with us.

"If he is also playing football all the time next week and there are photos of him, then he will be in the squad against Freiburg."

Aubameyang – who has been subject of reported interest from the Chinese Super League – is Dortmund's leading scorer this season with 13 goals in 15 matches.