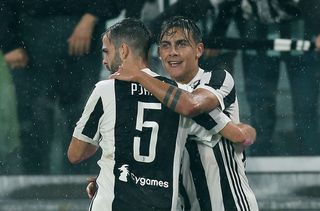 Paulo Dybala urged Juventus to quickly adjust their focus to the challenge that awaits in Barcelona after putting the seal on Saturday's 3-0 win over Chievo.

The Argentina forward came off the bench to net his fifth goal in three Serie A games this season, with Juve maintaining their 100 per cent start to the top-flight campaign.

Next up for the Serie A champions is Tuesday's trip to Camp Nou in the opening game of their bid for Champions League glory, having lost in last season's final.

And Dybala, whose side then travel to Sassuolo, underlined the need to build on the weekend's triumph.

"We must be aware that this is the first of three fundamental matches to tell us where the season will go," he told Mediaset Premium.

Speaking about his impact on the game, which saw him introduced when Juve were one goal to the good, the 23-year-old added: "The team was already winning, it's just that when I came on we changed system and there were more spaces to play in.

"We did well and deserved the victory."