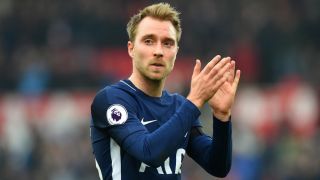 Christian Eriksen is ready for the likes of Barcelona and Real Madrid and should leave Tottenham if the right offer comes along, according to former Denmark goalkeeper Thomas Sorensen.

The Spurs playmaker has enjoyed a superb season under Mauricio Pochettino, with 10 goals and 11 assists helping them to a third-place finish in the Premier League.

The 26-year-old has been linked with LaLiga's most powerful clubs, with Barca said to be particularly interested as they seek a long-term replacement for departing captain Andres Iniesta.

And Sorensen thinks now would be the right time for his compatriot to move to one of Europe's elite.

"I know he has great feelings for Tottenham," he told Perform. "He's also a loyal guy, so for him to leave Tottenham, it would really need to be something special.

"I think he's mature enough now to go to a big club like that, where the expectations are there, also playing with other great players. I think he's at the right time now where he's ready for that. So, if that opportunity comes and it's possible for him, I think he should go."

10 - Christian Eriksen (10 goals, 10 assists) is the third Tottenham player to hit double figures for both goals and assists in a single Premier League season, after Jurgen Klinsmann in 94/95 and Emmanuel Adebayor in 11/12. Star. 30 April 2018

Sorensen, who earned 101 senior caps for Denmark and even shared a room with Eriksen at the 2010 World Cup, thinks his old team-mate has developed into a true leader for club and country.

"You can only bow to his exploits this season," said the former Aston Villa keeper. "He's been tremendous for club and country.

"I've known him for many years, I shared a room with him at the World Cup in 2010 and I've been fairly close to him. He's a very quiet boy but I think he's grown into a man over the last couple of years. He's taken on the responsibility, both at Tottenham and also in the Danish team. I think that's where he's developed.

"He's always been a technically good player, great vision. But now he's taken that step of actually being a leader as well and taking responsibility in a way that he probably didn't do before. I think that's the massive difference. I think he's ready to go to one of the top, top clubs because he has that talent and also now the personality as well."