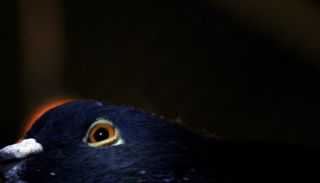 The champions, with 94 points, are looking to match Real Madrid's record La Liga mark of 100 achieved last season, and have to win their remaining two games away this weekend and at home to Malaga on June 1.

Espanyol, known as 'the parakeets', are 11th with nothing left to play for but will be keen to spoil the aspirations of their more illustrious neighbours, who they believe receive more than their fair share of support from local institutions.

The city council said they had been paid for the publicity stunt and that the replica top, signed by some of the Barcelona players, would remain in place from Wednesday until June 9.

"Calling all the pigeons of Barcelona... to the statue immediately to do what you have to do!!!" an Australia-based Espanyol fan club with the handle @pericoz said on Twitter.

Some Espanyol fan groups, through an official statement, have already said they would turn their backs and whistle when their team do the traditional guard of honour to welcome the newly crowned champions on to the pitch.

With a Champions League play-off place, three Europa League berths and the three relegation slots still to be decided.

Sociedad, who during the week revealed their coach Philippe Montanier had rejected a contract extension to return to his home country France with Stade Rennes, have the tougher assignment hosting second-placed Real Madrid.

Real are in a similar position after club president Florentino Perez said on Monday their coach Jose Mourinho was also to leave at the end of the campaign, by mutual agreement.

Valencia visit lowly Granada, who have pulled away from the foot of the standings with an impressive run of five games unbeaten.

Osasuna in 16th place with 36 points host Sevilla, and Deportivo La Coruna in 17th with 35, who visit Malaga, are looking nervously over their shoulders as the battle to avoid relegation nears its conclusion.

The clubs occupying the bottom three places, Real Zaragoza, one point from safety with 34, Real Mallorca with 32, and basement side Celta Vigo with 29, all play away at Real Betis, King's Cup winners Atletico Madrid and Real Valladolid respectively.

"I think there is more pressure if you are on the edge thinking you might fall in, than being below hoping you can get out," Celta goalkeeper Javi Varas said this week.

"We still have a slender chance... but we have to focus on our game because if we don't win it is all over."