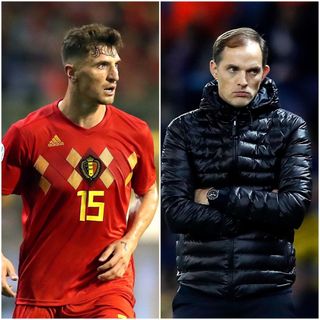 Arsenal have been linked with Paris St Germain defender Thomas Meunier after the Belgian admitted he was “frustrated” at his lack of game time, Inside Futbol reports. The right-back scored in PSG’s 3-0 Champions League win over Real Madrid on Wednesday night, but has sat on the bench as an unused substitute for the club’s past three league games. With Arsenal still needing to shore up their defence, and with Meunier’s contract expiring next summer, he has been tipped to leave Paris in January.

It is not only PSG’s playing staff catching the attention of English sides, with the Paris club’s head coach Thomas Tuchel being eyed by Manchester United, according to The Sun. Only six months after signing Ole Gunnar Solskjaer to a three-year deal, United management are keeping a close watch on Tuchel the paper says, citing French sources. However, United would face some stiff competition, with Barcelona also said to be interested in Tuchel after a bumpy start to their season under Ernesto Valverde.

Manchester City star David Silva is set to join David Beckham’s American side Inter Miami at the end of the season, the Independent reports. Silva, 33, is out of contract at the end of the current term and has said he does not want to play for any other Premier League side. He has been seen as a key target for Beckham’s Major League Soccer expansion outfit.

Barcelona are said to have joined the hunt for Erling Braut Haaland, after reports Manchester United were keen on the young striker. Spain’s Mundo Deportivo claims the 19-year-old has come into the sights of Barcelona after scoring a hat-trick on his Champions League debut for Red Bull Salzburg against Genk on Tuesday. Meanwhile, the Norwegian’s father Alf-Inge Haaland says it would be “nice” if his son joined United, despite having played for arch-rivals Manchester City and Leeds United during his career, Norway’s TV2 reports.

Leicester City are interested in Portugal full-back Andre Almeida, according to Portuguese media outlet Record. The Foxes sent scouts to watch the 29-year-old play for Benfica against RB Leipzig on Tuesday in the Champions League. While Almeida did not feature, Leicester are keeping an eye on him with a view to bolstering their defence.

Ronaldo explains the meaning behind the hand gesture he made to abusive Atletico Madrid fans https://t.co/qODj7dFtUh— The Sun Football ⚽ (@TheSunFootball) September 20, 2019

Sadio Mane: The 27-year-old is about to sign a new five-and-a-half year deal worth around £220,000 a week, says Gazzetta dello Sport.

Josef Martinez: The Venezuela striker scored a winning brace for his MLS side Atlanta United during the week, and Newcastle and Everton are watching, says Newcastle’s Chronicle.

Xherdan Shaqiri: The Liverpool Echo says the Switzerland midfielder is “a little downbeat” over his lack of playing time with the Reds this season.